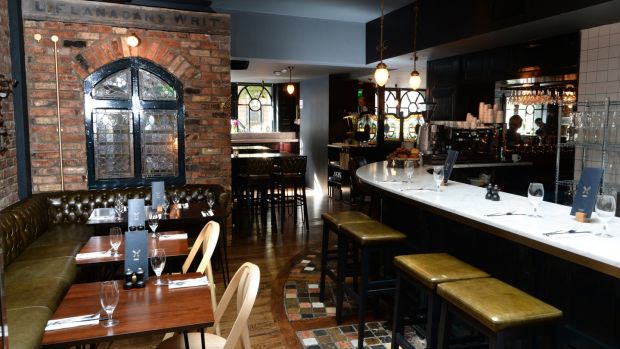 The algorithms are coming. As the robots come to replace us, I wonder what they will make of our work. Artificial intelligence can already produce journalism that reads like human copy. “Where should I eat, Siri?” I asked my phone recently. “Okay Catherine. Here’s what I found,” she said with (I’d swear) the smug tone of someone with a dastardly reveal. Then a list of local restaurants in less time than it would take me to wrinkle my brow and say “hmmmm”.

But wait before you rush off to try it. Stay with me. Being outpaced by a machine is sobering. But future humans will still want to know about those restaurants from other humans who eat food, right? I asked Siri. “Definitely,” she said, whispering “loser” under her breath.

It’s even harder to imagine the future breaching the antique bubble that surrounds the Four Courts. Barrister bots will probably still have to glide around in horsehair wigs and Harry Potter gowns, a tipstaff drone clearing the path for the judge, with lasers.

Yet the future has come to The Legal Eagle, which sits on Chancery Place (as apt a street name as any in Dublin). For a long time it was a place for cellophane-wrapped toasted sandwiches and terrible coffee, a neutral ground for defendants, barristers, journalists and stunned families going through the mincer of a trial and emerging for a gulp of normality, sustenance or courage. At one stage it was a heavy metal rock bar. Now it has been taken over by Elaine Murphy’s team.

Murphy is a powerhouse in the northside restaurant scene with businessman Brian Montague. They own The Winding Stair, The Woollen Mills and The Grand Social in the city centre and The Washerwoman in Glasnevin. Plans for the Legal Eagle were delayed with a complicated build, but now the old doll is finished. The facade outside is painted a green so deep it’s almost black, and finished with gilded details to set off the name in an art deco typeface that’s carried on in the decor inside. The pub tables are still here but seating is in the form of handsome (and comfortable) birch chairs. It still feels like a pub, one that’s had a makeover rather than a rip-it-out-and-reinvent-it job.

The blank slate comes in the menu. The Legal Eagle is soaring solo, not like any of its sister restaurants and unlike any gastropub you would walk into. This is the least cut-and-paste menu I’ve seen in a long time, and I like it, so much that I wish I’d brought a bigger crowd to try more of the dishes.

“Can you recommend something delicious, but not fattening?” the friend is asking our lovely waiter. “Okay, forget the not-fattening part.”

The Legal Eagle is a feeder. Portions are as large as tribunal briefing fees, like the pork scratchings with smoked oyster mayo, white ivory curls like prawn crackers on steroids sprinkled with bacon crumb. They work best with generous dollops of the mayonnaise. We snack on these and two pickled eggs, one mustard, one beetroot. Glance once and you think two rugby balls of sorbet – raspberry and mango. Get over any nose-wrinkling reactions to pickled eggs and these are sweet and tangy umami bombs, whites dyed pink or neon yellow thanks to their time in a jar on the bar.

My friend has the shredded barbecue chicken. It comes on a wedge of iceberg lettuce, which looks unwieldy but works “like a 3am kebab” only posher because “half of it hasn’t ended up down my front”. And there’s buttermilk sauce and hazelnuts. My flatbread, which looks just like pizza and even comes with a pizza wheel, is wood-fired potato bread topped with smoked haddock brandade a sprinkling of almonds and a poached egg. It’s robustly tasty but so chewy it needs to be wheeled into fingers to avoid RSI injuries from all the knife sawing.

Desserts are dramatic. There’s a peanut-butter baked Alaska that looks like a hedgehog made from spiked sugary meringue goo blow-torched mushroom brown and surrounded with cubes of jelly. The winner is a humbler-looking but truly great slice of treacle tart, caramel brown custard in a biscuity base. Excellent coffees (at €2.80 apiece) wind up a great lunch.

In the near future I predict The Legal Eagle will be crammed for lunch. The trick will be filling it for dinner, when the whale customers for the pricier dishes (a kilo chateaubriand for €75 anyone?) might prefer a little more distance from the scene of the dime (okay I’ll stop with the barrister digs now). Some of the evening menu and comprehensive wine list (more book than list) are clearly designed to part some senior counsel from their guineas, but then there’s also the option of a €4 crisp sandwich at the bar. The Legal Eagle is quirky, generous and the right kind of bonkers, a gastropub that takes the blandness out of the concept of great food in great pubs and refits it for a jaded world. An algorithm might not send you there, but I will.