Unicorn review: How does a liquid legend Celtic Tiger restaurant move on?

Apart from a tweak of the name, it seems not much has changed at this old perennial’s latest incarnation 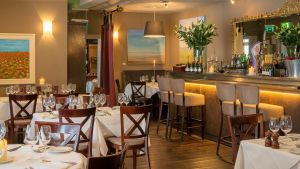 Brendan Behan painted two words on the wall across from us more than half a century ago. It was back in Behan’s days as a house painter and sign writer when he clambered up a ladder to paint the words “No Parking” on the wall. Hardly his finest work, but it would have been a nice nugget for a writers’ tour of Dublin. Sadly it exists now, according to the internet, only in a photograph in an archive at the University of Delaware.

We’re sitting outside The Unicorn in a laneway off Dublin’s Merrion Row. My journalist friend heard the Behan story back in the day when the Unicorn was stuffed with more hacks than the average newsroom.

Saturdays in the Unicorn were the stuff of liquid legend, but I knew it in the 1990s for its Friday buffet lunch. You were guaranteed to bump into newspaper people convivially pouring themselves into the weekend over the pickled artichoke hearts. Industrial quantities of highly enjoyable guff and gossip filled the air through those long afternoons. And the food wasn’t bad. You could even wander back for seconds if you were feeling sensible. Happy (if fuzzy) memories.

The lights went out in the Unicorn during the downturn. It was taken over by the owners of Fiorentina restaurant on Parliament Street, according to the website, which makes much of the restaurant’s history, dating it back to 1938.

I had a lunch of two halves here in April, starting well with good bread and starters before petering out with an uninspiring fish stew and a joyless set of desserts. But then a colleague phoned about a photograph and someone in the restaurant said that everything was changing, the food, the team, the lot. So I put the review on ice and have returned to see the new incarnation.

And I’m damned if I can detect anything much different, other than a name tweak. My receipt this time says simply “Unicorn” at the top. The one in April said “Unicorn by Fiorentina”.

Whatever has gone on behind the scenes, the tables are still swathed in heavy linens. Even our table outside is linened and topped with cheery fresh flowers in a vase. The look still says: nothing Nordic will happen here. We’re in the old country, where the only tattoos are worn by cartoon sailors on the sides of the anchovy tins.

The menu looks pretty similar as well, and it comes in a Fiorentina branded folder. It’s a mix of posh pasta, seafood and heavy-sounding dishes that might appeal more in the depths of winter. Does anyone eat “rump of lamb with rosemary jus and roasted potatoes” in July? So we step around the evergreen staples and try to eat to reflect the joy of sitting in shirtsleeves outside.

Arancini is one fat arancino with a creamy cauliflower puree and enough Taleggio to make the whole thing into a not unpleasant cauliflower cheese scenario. I have chicken livers expertly fried in marsala and tumbled onto a piece of toasted bread. They’re great, though slightly spoiled by a clump of cream that tastes fine but looks like it’s about to be butter.

I stick with a second starter for main: a small but very good bowl of Dublin bay prawns served, according to the menu, with n’duja butter. Combining the spreadable salami with butter sounds like an excellent idea, but I’m having trouble tasting anything piggy or buttery in a light brown broth flecked with parsley, which simply tastes like a really good bisque.

Across the table there’s a skate wing. Whatever about anything else, the fish is more impressive. The fan of bones has been crisply fried in butter, leaving the flesh underneath still meaty and white, and it’s topped with the crunch and tang of samphire and capers.

My dessert makes for a duff end. It’s a pannacotta in which any delicacy or wobble has been gelatined into rubberiness. The rhubarb is like under-flavoured babyfood puree – the purple blobs have none of the stringiness or the tang of rhubarb – and the whole thing is topped with three leathery raspberries which manage not to taste very much of raspberry. A bowl of ice cream is fine and we finish with good coffee.

So I’m still a bit bewildered. I like the elegance of the place and most of the food. Service is excellent and they are taking a smart approach and sourcing better ingredients. But Unicorn feels like a restaurant in a holding pattern. And I’m not entirely sure where it wants to go next.

Lunch for two with a glass of Gavi, sparkling water and two coffees came to €73.60