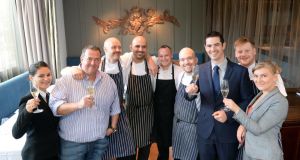 Two decades as a Michelin-starred chef ended with a lunchtime tweet for Kevin Thornton on Wednesday.

Did anyone contact him before the list hit social media with a gap where Thornton’s star once sat? “No. Not a word,” he said.

So what went wrong? Thornton is as mystified by the bombshell as the rest of the restaurant world. “We feel we are on top of our game after 25 years in business. We are thrilled to have been awarded restaurant of the year in Ireland just a few weeks ago so the news about Michelin is quite shocking and bizarre,” he said.

Thornton’s Restaurant’s longevity on the list, five of them as a two-star establishment, might have been a factor, but Michelin never explains.

Thornton’s, which started on the Grand Canal before moving to the Fitzwilliam Hotel, is the second-oldest starred restaurant in Dublin after Restaurant Patrick Guilbaud, which retained its two stars for the 21st year running.

The loss of the star held by Oliver Dunne’s Bon Appetit was the opposite of a shock.

Dunne effectively publicly posted his star back to Michelin headquarters when he turned his Malahide restaurant into a brasserie and tapas bar.

In The Greenhouse in Dublin chef Mickael Viljanen was quietly delighted that his day had finally come in his third year at the helm of the Dawson Street restaurant.

“I’ve seen them [the inspectors] come and go so many times, I just decided to keep at things and what’s meant for you won’t pass you,” he said.

The Finnish chef, who came to The Greenhouse from Gregan’s Castle in Co Clare, paid tribute to staff “and the people who made it possible” .

After just 10 months in business Enda McEvoy’s Loam in Galway was a surprisingly swift star. “I didn’t think we’d get one this year,” said the chef who has now brought two stars to Galway after winning his first at Aniar after 14 months.

“We were working towards it but I suppose my focus has changed from being an employee to being an employer. They heard about their star on their phones in Loam too,” said McEvoy.

“My sous chef Conor Cockram nearly fell into the bin and started jumping round the place. We went for a cup of coffee to celebrate.”

Michelin gave the burgeoning Belfast restaurant scene a ringing endorsement with two stars for the city that has been starless for five years since Michael Deane lost his at Deanes.

Stephen Toman was plating lunch in Ox Restaurant when his business partner Alain Kerloc’h came up and hugged him. “He just said ‘we got it’ and I didn’t believe him. I wanted to check it for myself and then when I saw it my shoulders just went down with relief,” said Toman.

Ox is joined in the elite ranks by Michael Deane’s Eipic, where Danni Barry becomes Ireland’s youngest Michelin-starred chef and the first Irish woman in 35 years since Myrtle Allen had one for The Yeats Room in Ballymaloe House.

“It’s been no secret that Michael gave me the opportunity and that’s what he wanted. But to have gotten it so quickly has been a surprise,” the 30-year-old said. “We always thought we were working towards it.”

Her decision to come home from England to work in Deane’s new fine-dining restaurant on Howard Street in Belfast was influenced by the city’s exciting food scene.

“With restaurants like Ox opening I definitely wanted to be a part of it.”

Toman said the two stars for Belfast meant that young chefs who want Michelin on their CV will stay. “It’ll keep a lot of food talent in this city so it’s fantastic.”

Catherine Cleary will interview Kevin Thornton on Friday at 6.10pm for The Irish Times’ Downstairs Dublin as part of Culture Night in the basement of 45 Merrion Square

Expert tips: A dentist on toothcare
3

Michael Harding: ‘I could hear my boots under the bed, crying all night’
6