Richmond review: A shining gem of a restaurant in Portobello

Richmond used to be late-night dive the Gigs Place, and what a transformation 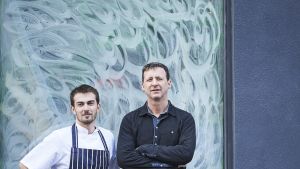 Nobody told them about the change of guard. At least that’s what I imagine when the couple who almost walk into Richmond take one look and turn on their heels.

Until nearly four years ago this small building was home to the Gigs Place, a South Richmond St dive that shared legendary status with its nearby neighbour the Manhattan. On this stretch, midway between town and student flatland, the Manhattan was where you tried to ameliorate a bellyful of drink with large quantities of fried food. The Gigs Place provided its own unique culinary offering: wine (of sorts) and a full Irish served in the witching hours between midnight and 6am. I never visited so I’m only guessing they recommended red with the black pudding and a cheeky Chardonnay with the white. It was a time when clean eating meant not picking your deep-fried sausage off the floor when it fell.

The fake Greek-tavern exterior plastered like a Christmas cake decorated with a shovel is gone. The Gigs Place has been hipstered. The debauched old doll of a building has had her teeth whitened and her kitchen industrially de-greased. Her new name Richmond (no “the”) is spelled out in fine-gauge red neon that sits to the right of the door. The transformation is remarkable. There turns out to have been an elegant beauty hidden under layers of tack. The number 43 is also spelled out in neon, giving the exterior a smart but lonely Edward Hopper-does-Dublin sort of look.

Inside, the vintage diner feel is continued with low red banquettes and a characterful wooden floor. It’s a cosy place. There are candles and a thick curtain on a curved copper rail to keep the wind from scalping those closest to the door.

Russell Wilde is the new owner and front-of-house guy, and his head chef is David O’Byrne, who has worked in French restaurant La Mère Zou and Mulberry Gardens in Dublin 4. Wilde has seen several people execute the same peer and veer I just witnessed. They’re old clientele, he guesses, who were hoping for a trip down smoky, eggy memory lane. The previous owner has been in and they’ve also had a visit from a former waitress, he says. They like what he’s done with the place.

And so do I. In these days of €9 desserts and forget the food, here’s another cocktail, it’s great to see prices that look like they come from darker economic days. We’re on the early bird, which is an all-night bird midweek and Sunday nights, of €25 for three courses. Of course it’s only a steal if the food is good, and the great news is 43 has gone from forgotten dive to shiny new city gem.

There’s cakey house-made bread with rosemary and a fluffy pesto butter (tastes way better than it sounds) to slather on top. A ham hock and rabbit terrine is a classic bit of French cooking with curls of root vegetables prettying it up with colour and crunch. Another dollop of tangy mayo wouldn’t have gone amiss for some zing to cut through the ham and rabbit, but that’s my only quibble. My oxtail croquettes are all thready meatiness wrapped up in a soft crumb and combined with a horseradish mayo that’s more gentle old mare than throat-scalding stallion.

A burger on brioche is bang-on, smoky meat that is everything a burger needs to be: good meat expertly cooked. I get the duck confit with a great single-fat polenta chip, crisp with parmesan on top and soft and soupy on the bottom. There are tangy beets and the only wrinkle is the saltiness of the duck. It’s offset with a carrot and orange puree that tastes so vanilla sweet I’d swear it was butternut squash.

Desserts are the best I’ve had in this price bracket: a date cake smothered in treacle-brown toffee with gingerbread ice-cream and fat toasted peanuts sprinkled over the whole thing. The trick is to eke out the peanuts so there’s at least one per spoonful to get the full-salt nutty crunch thing in every bite. There’s a lemon tart to make a Frenchman weep for home, with an apple-green pistachio ice-cream to make his Italian cousin mist up too.

Richmond is a great step up in the dining scene in this slightly down-at-heel stretch of Dublin street. So even if you’re gutted that the Gigs Place is gone, forget the past, step through the curtain and enjoy its new incarnation.

Dinner for two with three glasses of wine and a craft beer came to €76.

THE VERDICT: More than a good neighbourhood joint. Put it on your list of great city restaurants

There’s something convivial about Pupp, where four-legged clientele are not just welcomed – they’re almost obligatory. Everyone in the place had their own dog the day I visited, so much friendly chat ensued. Dogs are even more of a social lubricant than babies is the lesson. The menu is basic but good as they find their feet/paws. We had cheesy eggs on toast and a good baba ganoush spread on sourdough and topped with vegetables. Tails wagged in approval.