Review: New team at Locks looks like having longevity

This lovely room has seen more changes of hands than most in recent years, but looks like a keeper this time 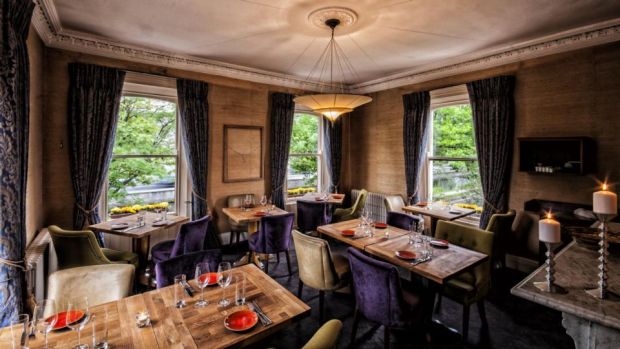 I’ve a friend who still gets misty-eyed at the memory of potato skins with salmon, prawns, hollandaise and spinach. It was a dish on the menu at what she calls the “old, old, old” Locks, a corner of culinary Dublin forever remembered by many a long luncher, before its recent reinventions.

Pearl Brasserie owner Sebastian Masi pulled down the shutters in July, after a rollercoaster few years in which Locks Brasserie won and then lost a Michelin star. There was a lull and then the duck egg green exterior was painted over with putty coloured paint and treacle brown trim, a mustard yellow door and lower case mustard yellow name.

A letter drop through the doors in the redbrick roads around them announced this latest chapter, the arrival of a more relaxed neighbourhood restaurant. All that scary star stuff is gone, the paint job and the letter seemed to want to say. A quick poll of two people on the new exterior? They hate it. “It looks like a burger joint,” says one friend.

The new kids on the canal are Keelan Higgs and Connor O’Dowd. Etto head chef Paul McNamara is a third silent partner. O’Dowd was Dax’s head chef and Higgs worked in Locks with Rory Carvill and more recently in the newly starred The Greenhouse. Both also had stints in Chapter One.

And there are echoes of all those kitchens in the short, snappy menu, as well as something new they’ve brought to the table. It’s the mix of high-end and bistronomie cooking that’s come together in Dublin’s loveliest and most romantic dining room, which is still largely the same inside.

“That is your soup,” the waiter jokes as he puts a painting on a plate down on the table. There is a small mound of crayfish, with a yellow froth and a slice of raw sweetcorn like a washboard leaning against it. You get to admire the elements before they’re swamped in frothy, creamy yellowness, poured from a jug.

It’s an old wheeze but it makes for pleasure in a spoonful, a fluffy froth of sweetness with a tang of dressing on the crayfish to cut it and the clean pop of slightly warmed raw corn kernels to add another riff on the sunniest of vegetables. It’s the best soup I’ve eaten in a long time even though it comes with a small side of neediness. Each one of the lovely young team here has served every dish with a look that says, please love us. But it’s fine because I do.

There’s lust at first scent for the snack of soft shell crab. When it arrives at the next table with a smokey waft of paprika and crabby batter, we add it to our order. It comes in a hefty wooden bowl with a puddle of oyster mayonnaise in the centre; three crabs entombed in batter, their papery, crisp soft shells surrounding juicy crab meat in an eat-everything crunch fest. It’s a small quibble, but I’d have loved a wedge of lemon just to set it all off.

There are bubble gum sized balls of beef croquettes with a rustically lumpy dipping sauce of capers, egg and parsley mayonnaise, like grown up Sandwich Spread.

A slice of rabbit and ham hock terrine makes the ham the star, bullying the rabbit into the background, but the hock shares the wow factor with a rapeseed mayonnaise that looks and tastes like the sunny yellow flowers of the rapeseed plant. Tiny radishes have their leaves still on and are draped alluringly around this lovely plate of food.

There are two wedges of charred smoky monkfish with sweet finger-sized Jerusalem artichokes, capers, and mussels as orange as the lava coloured side plates.

We share a coffee tart – an espresso made solid and cloaked in biscuity pastry, with a tangy raspberry coulis and biscuit ice-cream. A large slice has been portioned into two smaller ones.

To keep the menu this short and the prices keen, they’ll need to do a lot of below water paddling, like their chirpy swan logo, with regular tweaks and changes along the way. Even in its early weeks, this feels like a cooking duo who will prove up to that challenge. It’s not a burger joint. It’s a lovely new neighbourhood restaurant. New Locks feels like a keeper, a place that will plant its own fond memories for the future.

Dinner for two with two glasses of wine and a coffee came to €102.50