Inis Meáin Restaurant: Train, bus, boat and taxi – a place worth taking a trip for

Review: Worth every morsel of its 9.5/10, this restaurant combines elements of earth and ocean in its exquisitely-sourced food thoughtfully cooked 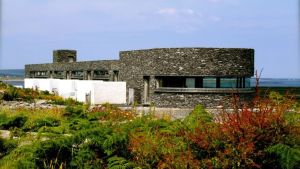 There is a crunch when we walk on sunbaked gutweed on Inis Meáin’s stone shore. The slippery bathmats of green have dried and bleached to the rough white pelt of a Connemara pony. The salt crystals sound almost like hoar frost underfoot. They had that here too in this year of snow and sun.

Inis Meáin is the quietest of the Aran islands and I’m visiting a friend who has been staying here for two weeks for the last six summers. Over one memorable day of islanding we’ll find a blow hole where ocean froth explodes from the limestone, swim in crystal water and listen to an Italian woman at Cathaoir Synge read aloud, her small group silent as Synge’s words ring out in Italian over the stone and waves he was describing.

Inis Meáin boils down elements of the bigger island where we live into one intense dollop of stone. Today its fields are drought brown. It feels like the place where weather was invented. In all this sparkling brightness the winter days, that Aran’s writer in chief Tim Robinson memorably described as “brief and gloomy dreams interrupting ever intenser nights” seem unimaginable.

Chef Ruairí de Blacam grew up on the island and he and his wife Marie-Thérèse opened the Inis Meáin Restaurant and Suites 11 years ago. Five minimalist stone and glass rooms provide accommodation for diners. A stay in the suites is expensive and returning guests get first dibs on the bed nights. (They’re booked up already for half of next year’s season). But the restaurant is open to non-residents three nights a week. So with a last-minute email, a dash by train, bus, boat and island taxi with a detour to pick up my friends we’re here.

Marie-Thérèse has time to show us the kitchen garden. The soil had to be brought over by boat and they fertilise it with seaweed. A stone wall was built around the polytunnel to keep the storms from snatching it. The rest of their produce is grown in a bigger garden “off-site” which means roughly “two fields away,” Marie-Thérèse explains. There is a henhouse with an ingenuous long-handled cup fashioned by an islander to fish out the tricky-to-reach eggs.

The couple allocated a strip of precious soil to asparagus and after four years they had their first harvest this summer. There were just enough spears for lunch for the two of them. Next year there should be more. Inis Meáin asparagus is the ultimate slow food.

Inside the restaurant has the world’s best view. The rounded prow of the long, low building noses its way through the stone like a whale. Sliced through its length is a gleamingly clean (today was window-washing morning) line of glass with a wide-angle view of the unfeasibly beautiful horizon. There is a banquette facing away from it. Chairs in felted wool face towards it. They put up a long mirror so the people with their backs to the sea can see both kitchen and panorama.

We start with a small glass bowl of scallop from Inis Meáin Bank, which lies a mile north. These luscious treasures have just been sliced into raw slivers and dressed with toasted hazelnuts, finely diced chives and pansies that sit like butterflies on top. As an opener, it’s a statement of intent: you will be tethered to this land and seascape in the simplest and most delicious way possible.

A perfect lobster tail gleaming with butter sits on a white plate. There’s an aerated mayonnaise, made (presumably) with those happy hen’s eggs alongside a stack of rocket leaves with nothing on them. It takes nerve to serve a vegetable like this. These leaves are as far from the limp stuff that wallpapers every sad salad plate you’ve ever seen. They’re wider-leafed with a subtle heat, robust enough to be dipped in the mayo. I’ll remember this plate long after the overworked emulsions, squeezy bottled dots and filigreed folderols of other plates have been forgotten.

There’s a beetroot carpaccio, all depth of colour and sweet beety flavour with tender marjoram leaves, nasturtium petals and a ballad-worthy creme fraiche. Then there’s turbot crisped in butter, flesh white as sea foam served with beans from the polytunnel and crisp skinned spuds. The finale is stewed apricots, which feel like they came from another warmer place but they’re balanced with extraordinary ice cream made from their lemon verbena patch.

At the risk of gushing like a blow hole I love every moment of our meal in the Inis Meáin Restaurant. Elements of earth and ocean sounds like a marketing cliche but that’s what’s here.Exquisitely-sourced food thoughtfully and calmly cooked is something we could do more on the mainland. Islander wisdom comes from seeing your place in the scheme of things with a clear unblinking eye. Dinner for three with a glass of wine, prosecco, elderflower cordial and sparkling water came to €249*.

Verdict: A memorably beautiful meal
Facilities: As minimalist and chic as the rest of the place
Food provenance: Exemplary. You can probably have a chat with the lobsterman in the pub afterwards
Vegetarian options: A set menu so these have to be requested
Music: So blown away by the food and the view I failed to notice any
Wheelchair access: Yes

*Correction, August 12th, 2018: An earlier version of this article said the price quoted was for a dinner for two people. It was a dinner for three