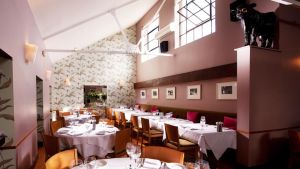 It rarely happens. You put a piece of food in your mouth and your body remembers the flavour from another time. Good food connects people to each other. Great food connects us to ourselves. Flavour memories lie dormant in our cells until something wakes them. It’s what the most ambitious chefs from the peasant cooking brigade to the science-lab gastronomers are aiming for. And when it happens I’m privileged enough to be sitting beside Fergus Henderson, the legendary chef who persuaded a generation of chefs to treat meat with the respect it deserves.

I’m a guest in The Tannery in Dungarvan, where the old photographs of piles of animal hides hung on bright clean walls in the former tannery building have never seemed more apt. It’s a raucous gathering of food people here for the Waterford Food Festival at what chef Paul Flynn is calling FergusStock.

Flynn and his chef Stephen Tuohy have prepared a Henderson tribute meal. So it’s a covers band performance with the original rock star in the audience. And the parsley salad that comes with the first course of roast bone marrow has just catapulted me back in time. I’m in someone’s garden and I’ve just eaten some freshly-picked leaves that are the essence of the colour green.

This dish is a constant on the St John menu, Henderson’s London restaurant. The platter of jam-jar sized bones with the marrow roasted inside, crisp sourdough toast and a tangle of freshly-picked parsley with capers is as rustic as food gets. Henderson scoops out the greyish jelly-like marrow, spreads it on the toast and tops it with the parsley. Beef, bread and a garden-fresh green come together beautifully.

In between courses we chat. This isn’t easy. Henderson was diagnosed with Parkinson’s in 1996 at the age of just 33. In 2005 he had a brain pacemaker fitted to control his condition. He exudes warmth, humour and curiosity. When he speaks his hands move as if uncorking a wine bottle whose cork is the length of the bottle. He pulls the words out of the air between his two hands. He can no longer cook in his restaurant, he says. He’s too slow.

Where’s his favourite place to eat in London? It depends on his mood. There’s a restaurant in the city called Sweetings where he goes for the novelty of the experience. It’s a 19th century wet fish shop and the staff bustle around you like you’re an inconvenience. Then there’s a new Japanese restaurant near St John where they serve astonishing food and a mean saki.

Next up is ox heart with beetroot salad and a horseradish sauce. Celebrity maitre d’ John Healy explains to Henderson why when you’ve had a heart transplant it “feels a bit weird” to be eating heart.

The pink meat looks like bacon and is thinly beaten and fried and drenched in purple beet juice. A horseradish cream brings a kick to the dish against the sweetness of the beets.

Next, a whole brill, pan-steamed over a sweet broth of celery and onions is divided between the table.

Then we get a pot roast half pig’s head. Culinary lecturer JJ Healy tells us how it was his job as a child to watch the pig’s head as it boiled on the stove for his grand uncle, who went to the pub. Healy’s job was to lift it out onto the draining board and cover it with a teatowel. And there it would sit for days, having pieces sliced off it occasionally.

Unlike those pale boiled heads of old, our roasted half head is St Tropez brown. Its crispy ears are divided and then the sweet pink cheek meat is shared. I try some tongue, which is soft and sweet like a meat pudding, and finally I eat the pig’s eye. Not all of it. I share the other half with TJ Crowe, the butcher who farmed the free-range pigs. Mercifully there’s no pop and squirt to it. It’s surprisingly chewy, a soft gristly unmistakable pork flavour. I have earned my Eye to Tail credentials.

At the end of this stupendous meal the white tablecloth looks like a crime scene. Will FergusStock leave a lasting legacy on the Tannery menu? Expect pig’s head dishes in the autumn and bone marrow as a garnish on beef dishes, Flynn says.

And the parsley? They weren’t sure they’d have enough so they ordered some and it was “droopy and shabby”.

Then their kitchen garden came up trumps with a crop of fresh green leaves. It’s the kind of ingredient that makes The Tannery one of the country’s best restaurants. The pigs’ eyes were a one-off, part of a memorably unique night in Dungarvan.


THE VERDICT: 8/10
A wonderful night of thought-provoking food