Kale and ham hock terrine with cornichons and salad cream 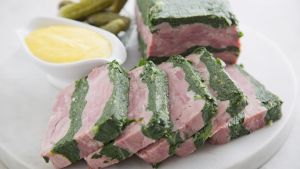 Cover the ham hocks with cold water and boil for approximately three hours, or until the meat is falling from the bone. When they are cooked drain the liquid into a separate large pot and set aside. Leave to cool for 40 minutes then, while it is still warm, remove the meat from the bone being careful not to include any muscle tissue or fat.

Put the ham stock back on a high heat and bring to the boil. Slice up all the kale, wash it in cold water and drain it. Blanch the kale in the ham stock for approximately three minutes or until tender. You can cook it in small batches until you’ve it all done. You need to work with the kale while it is warm.

Make sure you keep the stock. Do not pour it down the drain. Lay out one roll of cling-film that goes six inches longer that a 1lb loaf tin, either end. Now place another roll of cling-film down that’s the same length but overlaps the previous roll from the middle, making your roll 50 per cent wider. Repeat until you have four layers.

Set the loaf tin onto a larger roasting tray so that it catches excess juice and bits of ham hock and kale.

Start your terrine assembly by adding a layer of kale about two inches high and the length of the tin. Now ladle over some ham stock. Top that with a row of ham hock, which should bring you to the halfway point of the terrine. Again, add a ladle or two of ham stock.

Repeat this layering process until you come up at least two inches above the depth of the top of the tin. It will look like you’ve far too much in the tin but this is essential for the pressing process.

Ladle over more ham stock, until you’re sure the tin is full of it. It will be leaking over the edges a bit and will look a tad messy and sticky, that’s why you have the larger tray underneath to catch the excess.

Now fold over the outer cling-film edges and move the terrine to a clean tray. Place in the fridge, topped with two litres of milk to press it overnight.

After 24 hours, remove the terrine from the tin carefully, using the cling-film as leverage. Trim all the edges to tidy it up then roll it about six to eight times in fresh cling-film to tighten it. This will help with the slicing.

For the salad cream: Add the egg yolks, mustard, caper juice, vinegar, turmeric, three pinches of salt and three pinches of pepper and the lemon juice to a food processor and blend for 20 seconds. Make sure it’s well mixed then turn the processor on again on a medium speed and slowly add the oil until it is emulsified.

Spoon into a serving dish, slice the terrine and serve with cornichons.