Review: Liath is a beautiful, joyful one-man show with no stiff service or reverential whispering 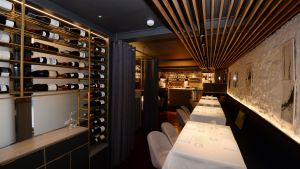 Sometimes the room seems too small to hold Damien Grey. Like when the chef yells “sing up for Chrissake,” to encourage a heartier rendition of Happy Birthday for a fellow diner. My Aussie friend feels a pang for her scorched homeland. It is so great, she says, to see an Australian being so Australian.

It’s taken a while to get to Liath, the one-man show that stepped up when Andrew Heron, Grey’s front of house partner in Heron and Grey bowed out. Demand for tables in the tiny place in south Dublin’s Blackrock Market didn’t dip. The star stayed put. I had a booking late last year that got bonked on the head literally with an unscheduled dash to A&E (long story happy ending).

But now we’re here. On a wintery midweek night in a shut-up village, Liath feels like the only restaurant with the lights on. It’s like opening the small double door on a post-apocalyptic fine dining speakeasy.

The new name – the Irish for grey – has meant another fit out with tablecloths and banquettes. The gas stove, which famously had one working burner, is gone, replaced with induction hobs. This is less plucky start-up, more sleek, focused ambition.

We’re at the table nearest the kitchen where the small majority female chef crew place the dishes on a ribcage height counter, designed for fewer crocked spines later in their cheffing lives.

Getting told what you are going to taste helps you to taste it better and that has always been part of the package here. It’s a quiet start with a celeriac and chick pea tian speckled with the tiniest cubes of duck jerky and a silky ooze of pecorino hinting towards the richness coming. A disc of celeriac and parsley powder drapes over it like a skin of penicillin lifted off the jam jar.

Next there are brown shrimp in fermented and charred sweetcorn with a chili miso and tarragon oil, a dish that’s almost too busy and then isn’t. A zinger teaspoon of lemon done a gazillion ways – aerated, salted, candied, jellied – is hours of effort distilled on to a teaspoon.

In another bowl dots of oyster cream are arranged with crisp puffs of kelp crackers with dill and trout roe and the juice of Australian finger limes. That and a sweet ginger vinegar takes the brackish sea flavour up a notch. It’s finished with gold leaf “that’s just doin’ bloody nothin’” as Grey explains, cheerfully abusing the fine dining trope.

A tiny cone filled with smoked eel and anchovy with aerated Parmesan and macerated shallots to slice through the richness is wolfed. Grey jokes that he’s going to sell them to Marks & Spencer and make his fortune.

The next dish is my favourite: three squid ink black dumplings filled with mushrooms: shiitakes, chanterelles and ceps in a mushroom, chilli and ginger tea.

The largest plate holds luscious sika deer venison topped with “drunken truffles” brought back from Australia and soaked in brandy and port. I love this plate but for one element. And yes, pressing the back of a hand to your forehead and whining “enough with the foie gras,” is as spoilt brattish as it gets. But enough with the foie gras. No more slithery discs of rich folk’s pate please. It’s like a belch of fetid breath from starry meals past. And Liath’s vegetable game is top notch. There’s been a vegetarian version of everything for my veggie friend.

The last savoury is the Swiss cheese L’Etivaz shaved into impossibly thin petals and teamed with a smoked beer sauce and charred kale.

Sweets are a dulce de leche with chopped macadamia nuts and a coffee and sheep’s cheese blob of gorgeousness. The final flourish is the chocolate plate from the old days, with a mystery white chocolate sweet that most people still guess is filled with passion fruit (it’s fermented raspberry).

The non-alcoholic drink pairing is the best fun any non-drinking friend will have in a restaurant. The lemon and thyme lemonade is a highlight, along with a rose and juniper non-alc gin. Drinks like these make this place the only other restaurant on the island giving Aimsir a run for its non-alcoholic money.

Liath feels like it’s reached adulthood, still restless, ambitious and creative but grown into itself. We don’t see anyone who looks like they’re dining on a company credit card. This is not a place of stiff service and reverential whispering. It’s just beautiful and joyful, reverent and irreverent in equal measure and we need as much of those experiences as we can get.

Dinner for two with one non-alcoholic drink pairing, filtered water and house made juice came to €243

Verdict: Exquisite cooking that puts the fun in fine dining.

Food provenance: Limited on the menu

Vegetarian options: Need to be requested but brilliant

Wheelchair access: 2/5. Room is accessible (at a squeeze) but no wheelchair toilet