Sean Moncrieff: Privacy these days? Mind your own business 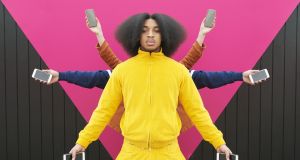 Young people today know that the likes of Instagram and TikTok are recording details about them. And because they know it, they don’t find it sinister. Photograph: Getty Images

I regularly write here about myself and my family: often to demonstrate some ill-thought out point, or generate a bit of humour or simply because I can’t think of anything else. Or all three. But I don’t reveal everything. Obviously, some things are private.

Yet everyone has their own definition of what “private” is. I find it baffling when someone in the public eye voluntarily opts to share some dark or painful part of their life, and for predictable reasons: to “raise awareness” or “clear up media reporting” or “to help others”. They may believe this to be the case, but from the outside it often looks like they are mortgaging off another piece of their life to promote a book or a film. Or just for a bit of attention.

Not too long ago, there was a tabloid media buzz over claims from a musician called August Alsina that he’d had an affair with Jada Pinkett Smith, the wife of Will Smith. Coincidentally (or perhaps not), Jada had just launched a web series called Red Table Talk, where she and sundry Pinketts and Smiths talk about themselves. Inevitably, Jada and Will appeared in an episode – to clear up media reports – where they revealed that the affair had in fact taken place.

I watched half of it. I couldn’t stick any more as I found their towering self-regard unendurable. At the start, Will made the point that they hadn’t commented on the affair, but failed to provide (to my mind) a credible reason as to why they were talking about it now. Talking about it only gave the story legs for another news cycle. When I looked at it, this edition of Red Table Talk had been viewed 24 million times. Privacy, it seemed, wasn’t an issue.

Legislators – mostly boomers like me – are generally exercised about online issues of privacy. Which is why we have GDPR. You know: that box you tick without thinking much about it.

Yet it seems as if vast amounts of people – particularly the generation that has grown up with social media – aren’t too bothered about it; or at least not as bothered as their elders. Studies show concern among millennials and Generation Z about targeted advertising and data harvesting, but it’s always a minority. A majority seem to have accepted that this is the price of having access to social media.

Total honesty is the expected norm, and anything less than that tends to be viewed with suspicion

This doesn’t appear to be heedlessness; rather a completely different concept of privacy: the idea that most things should be out in the open, that brutal transparency is an unquestioned good. And no, they won’t come to regret it at a later date, as us oldies are fond of telling them. I asked Daughter Number Three if there was anything about her life that she wouldn’t post on social media, and she shrugged. No. So many things in the past weren’t spoken about, she said. But now we – meaning her generation – have social media. Total honesty is the expected norm, and anything less than that tends to be viewed with suspicion.

They know that the likes of Instagram and TikTok are recording details about them; they know that influencers, in between talking about skin care, veganism and their feelings, are often trying to sell them stuff. And because they know it, they don’t find it sinister. They think it’s a pretty good deal.

It’s an economic transaction, their part of the bargain being access to a system of communication where everyone gets a say. In turn, this has produced a cultural shift, where if you’re completely open, you’ve nothing to hide. No one minds their own business.

I still don’t get it. My instincts baulk at the idea of revealing too much to people I don’t know. It could be my age or my personality type. What I do know is that if I win the Lotto, I won’t be telling the kids.