One box of eggs, 19 delicious ways to use them

Tired of boiling or frying? From French toast to huevos rancheros, there are plenty of alternatives 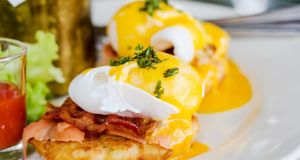 It is a time of scarcity, but also of glut; a time when you might buy 18 eggs at the supermarket, just because the last time you tried, they didn’t have any. This could present an opportunity for creativity, but 18 eggs is enough to induce a failure of imagination in anyone: you boil them, fry them, poach them – then what?

Here are 19 delicious and slightly further-afield recipes to use up your eggs, most of them employing simple ingredients you may already have.

I get way too much credit for making my own mayonnaise – it just isn’t very hard. Everyone should make their own mayonnaise. All that’s required is some egg yolks, oil, salt, mustard, vinegar or lemon juice and about 10 minutes of your time. If you’ve never done it before, Felicity Cloake’s perfect mayo is the place to start.

Use a heavy bowl placed on a tea towel – when you’re whisking with one hand while pouring oil with the other, you don’t want the bowl skidding around the worktop. The trick is to start slowly – add only a few drops of oil at time and gradually increase. I find mayo pretty forgiving – an accidental slosh of oil at the start can usually be accommodated – although I must admit that one out of every 20 times I do it, things go completely wrong for reasons I can’t fathom. I still think that’s an acceptable failure rate for almost anything except routine surgery.

Call it what you want, but as an American, I find it hard to say the words “eggy bread” without pulling a face. Having said that, the recipe is more or less the same. Beat some eggs with milk, dip in slices of slightly stale bread (almost any kind will do, from crappy supermarket white to brioche), fry on both sides in butter until light browned and . . . voilà is possibly not the right word to use here.

This is more an artefact than a meal, a forgotten fossil of the American diner experience. The Monte Cristo is basically a ham and cheese sandwich (the cheese is usually swiss – emmental, say) that has been dipped, in its entirety, in some beaten egg and then fried as a solid mass. The result is, shall we say, pretty dense – French toast gone insane. Perversely, a Monte Cristo is also sometimes dusted with icing sugar. It’s the sort of no-nonsense, down-home cooking that killed Elvis. A recipe is probably unnecessary, but I include one here just so you know I’m not making this up.

Eggs feature in lots of different soups, but few are as pleasingly rudimentary as Chinese egg drop soup. Most versions, like this one from Lilly Higgins, promise a quick overall preparation time. It’s just chicken stock, thickened with a little cornstarch and flavoured with ginger, sesame oil and spring onions, into which beaten eggs are dropped so they form ribbons. Honestly, I’m making it sound harder than it is. Rachel Roddy’s recipe for the Italian equivalent, stracciatella alla romana is just as basic, employing semolina, parsley and lemon zest instead.

This Spanish breakfast – a sort of ratatouille with eggs – is one of a number of regional variations on a simple premise: Lilly Higgins’s simple shakshuka uses a mix of red and yellow peppers; Turkish menemen is much the same; Diane Kochilas’s Greek version contains fennel and feta; and Deborah Ryan’s take uses chorizo and sweet potato.

I tend to make this when using up odds and ends, so I work with what I’ve got (a wrinkly pepper, an aubergine and half a bag of spinach, say). Sweat some onions in a frying pan or casserole with cumin, a bit of garlic, chilli and paprika. Add the other veg and when everything is softened, chuck in a tin of tomatoes. Simmer until a dent pressed into the mush with a ladle holds its shape long enough for you to crack an egg into it, then do that three more times. Cover and cook until the eggs are how you like them. Serve with good bread.

As James Hart, from the restaurant chain El Pastor, says, this really is just three ingredients: salsa, tortillas and fried eggs. It’s perfect for those mornings when a beer with breakfast seems advisable, although Hart’s salsa of peppers, onions and chipotle might require either a clear head or a certain amount of foresight. Seb Emina’s version is simpler and bears a passing resemblance to the pisto to which it is no doubt distantly related.

This is a bit of a restaurant breakfast – when you type it into Google, the first thing that comes up is not “eggs benedict recipe” but “eggs benedict near me”. It was invented, allegedly, at the Waldorf in New York, in response to the demands of the hungover socialite for whom it is named.

What generally stops people making Eggs Benedict at home is the hollandaise sauce, which is fiddly and prone to splitting and curdling. Domini Kemp plays fast and loose with the classic recipe and opts for no hollandaise at all. But if you’ve got an excess of eggs and the time to practice, now might be your moment to conquer hollandaise. Felicity Cloake’s optimised recipe will give you a decent chance of getting it right first time, and once you’ve mastered it you can deploy it as a luxurious accompaniment to asparagus, which is very big right now.

They have a certain symmetry: the separated eggs come back together when the meringue is folded in, so you don’t have to figure out what to do with a big bowl of leftover egg whites. Paul Flynn’s twice baked Cashel Blue soufflé is made from simple ingredients – flour, butter, milk, breadcrumbs – and he allows any ripe blue cheese as a stand-in. If you’re after something sweeter, you might try Vanessa Greenwood’s baked blackberry soufflés.

When this lemon tart appeared in the first River Cafe cookbook, it fascinated the amateur: it looked easy, if highly improbable. There is still something highly daunting about a recipe requiring six whole eggs and nine additional yolks. And you don’t roll the sweet pastry; you grate it directly into the tart tin, press it down and blind bake it. For the filling, you whisk the eggs with the juice and zest of seven lemons and 350g of sugar over a very low heat, adding 300g of unsalted butter in two instalments – half at the start, half as the mixture thickens. After that, the assembled tart needs 5-8 minutes in a hot oven to colour the top. You can watch a very old video of Ruth Rogers of the River Cafe demonstrating the recipe for Martha Stewart here. Rogers might look as if she’s trying to signal that she’s being held hostage, but it’s still a handy guide. Vanessa Greenwood’s recipe includes tips on how to avoid the dreaded soggy bottom. – Guardian