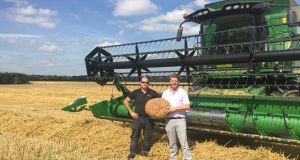 Wheat grown in Newcastle, Co Dublin, is being milled and used to make wholemeal breads by The Natural Bakery, which has 12 retail outlets in Dublin and Kildare.

The Grain Project is an initiative begun by the company last year, with the aim of sourcing Irish wheat and other cereals for its breads. “We’ve gone back to basics by milling our own flour in-house, on a stone mill we got from Austria last year, from wheat supplied by a Co Dublin tillage farmer,” says Luke Creighan, owner of The Natural Bakery.

The local crop is turned into wholemeal flour, and Creighan says his company’s brown and wholemeal breads are now all made with Irish wheat. “We are working on planting new types of grains for next year’s harvest,” he says.

National Bread Week begins on Monday and runs until Sunday, and to mark this, as well as Sourdough September, The Natural Bakery is giving away sourdough starter kits at all of its shops, as well as running free sourdough baking demonstrations at its Donnybrook branch every Wednesday evening this month (6-8pm).

The always fabulous Fumbally Cafe and Fumbally Stables in Dublin 8 has a new autumn line-up of events called EAT:ITH, running during this month and next.

The highlights include a dinner cooked by Keith Coleman from Fia cafe, Mark Jennings from Pilgrims and Ken Doherty and Gwen McGrath of Assassination Custard (October 21st), and a debate on Irish food culture in which Irish Times columnist JP McMahon of Aniar restaurant in Galway will go head-to-head with Máirtín Mac Con Iomaire, lecturer on food history and culinary arts at DIT (September 26th).

The debate will be hosted by Harry Colley and Aoife Allen, who make the With Relish podcast, and it will be recorded live as part of the Dublin Podcast festival.

There will also be a parent and child pickling workshop (September 16th); and a trip to Moy Hill organic farm near Lahinch in Co Clare run by former pro-surfer Fergal Smith along with fellow surfers Matt Smith and Mitch Corbett (September 17th).

In all there are five free talks and a range of ticketed events (€5 to €100), and the full programme is online at eat-ith.com

War of the rosés – and Merlots

Who makes better wine, the French or the Californians? The famous Judgment of Paris showdown of 1976 will be re-enacted at Restaurant FortyOne at the newly open-to-all former members’ club, Residence, on St Stephen’s Green on Friday, September 22nd.

Hosted by head sommelier Victor Nedelea, the event will begin with a canapé and Veuve Clicquot rosé reception at 6.30pm, followed by a three-course dinner of scallop and crab ravioli, venison loin, and farmhouses cheeses.

Each course will be accompanied by two wines, one from each region, tasted blind, and diners will vote for their favourites. At the end of the evening, the winning wine region will be revealed. Tickets are €110 and can be booked by calling 01-6620000.