Music and winning food served up by Paul Harrington 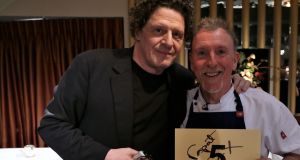 We know he can sing, he’s got that Eurovision gong and a career spanning more than three decades to prove it. But who knew Rock ’n’ Roll kid Paul Harrington could cook, and at such an accomplished level that he earned a five-star rating on a recent episode of The Restaurant on TV3?

Starters of seared scallops, and crab and spinach roulade also found favour with the trio at the top table, and his desserts of Siobhán’s sherry trifle (inspired by his late sister) and lemon tart nailed him a maximum score.

Harrington’s winning menu is being served at a one-off night at Courtyard Bar & Grill, where the show is filmed, on Thursday, May 10th. But instead of banging pots in the kitchen, he will be providing the musical entertainment, with his band, and playing tunes from his forthcoming album Lights of Home, out on May 4th.

When Declan Breen was living in Dubai, where he ran a plant hire company for 14 years, the only pizza his daughter would eat, and the only one that didn’t leave him feeling a need to “curl up in a ball after eating it”, was NKD Pizza.

The brand has expanded from Dubai to the UK, and now to Ireland, with the opening of the first outlet at Orwell Road in Rathgar, Dublin 6.

The makers of NKD Pizza claim it will “satisfy, not slow you down”, due to its lighter base made with a blend of 10 grains, prebiotic agave fibre and probiotics. The 10 grains – quinoa, spelt, tapioca, amaranth, oats, teff, buckwheat, barley and two types of wheat – are sourced from within the EU and for the Irish outlet are ground and blended by Shackletons Milling in Ashbourne, Co Meath.

The handmade dough is proofed for 48 hours before being baked, which also contributes to it being easier on the digestive system. Prices range from €5 for a seven-inch Margherita, to €22 for a 13½in Sweet Heat with sriracha sauce, mozzarella, piquillo peppers, red onions, mixed peppers, jalapenos and chilli pepper pearls.

Breen, who returned to live in Ireland last year, is managing director of the business. He and his three partners, Adrian Grey, John Nolan and David Fitzpatrick, have secured the franchise for Ireland and aim to open 30-50 outlets on the island, concentrating first on Dublin and Belfast, from where they have already received inquiries from prospective franchisees. NKD Pizza is available for collection and delivery.

The global gin craze has infiltrated another phenomenon of our times – afternoon tea. Bombay Sapphire gin is the latest theme for the fancy collation served at The Restaurant by Johnnie Cooke in Brown Thomas, Dublin.

The themed tea is available to book between 3pm and 6pm, until June 17th, and costs from €35.