Andrew Heron, one half of Heron and Grey in Dublin's Blackrock, gives his reaction after Heron and Grey was awarded a Michelin star. Video: Meggie Morris 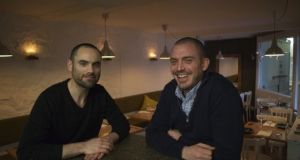 Ireland’s newest Michelin- starred chef has a sink that leaks, three burners that don’t work and a restaurant without any toilets.

Australian-born chef Damien Grey said none of that mattered and urged other chefs to “just cook from the heart”.

Heron and Grey, a tiny windowless restaurant in a corner of Blackrock Market in Co Dublin, became one of the world’s smallest Michelin-starred restaurants yesterday when the only new star for Ireland was announced at a ceremony in London.

Before yesterday’s news broke Heron and Grey was already booked out until next January.

The restaurant has been open for less than a year. It opens just three nights a week, Thursday to Saturday, seating about 24 people a night. Diners use the market toilets around the corner as the restaurant premises is too small to house its own.

Got a phone call

Mr Grey said he got a phone call from Rebecca Burr, editor of the Michelin Guide to Britain and Ireland last Tuesday asking them to attend yesterday’s London event. They were asked to keep the news secret. Along with his business partner Andrew Heron, who runs the front of house, they were “ushered in a side entrance” of the Institute of Engineering and Technology at Savoy Place and corralled in a room with the other new one-star chefs.

It was “surreal” Mr Grey said to receive the star in front of an audience that included Michel Roux and Heston Blumenthal. “I just looked down at them and thought ‘holy Jesus almighty’.”

Born in the small Australian town of Goulburn, Mr Grey (41) moved to Sydney when he was 17.

He met his Irish wife 19 years ago and moved to Ireland. He and his wife Claudine have two daughters aged six and nine.

He worked in Patrick Guilbaud’s now closed Venu Brasserie and returned to Australia as head chef at Sage restaurant in Canberra for three years until 2014. He also had a six-month stint in Chapter One before deciding to open his own place.

He paid tribute yesterday to James Sheridan and Soizic Humbert who were “trailblazers” when they turned the corner room into Canteen at the Market where they served a brilliant five-course set menu.

Late last year they moved to Celbridge to open a restaurant and Heron and Grey took over.

Mr Grey said neither he nor Mr Heron had taken a salary in the first six months. The menu changes every fortnight according to the season and they had worked up about 1,300 new recipes.

“We took the attitude that we don’t care what everyone else is doing. We want to do what we love to do.”

Michelin has long been trying to throw off its fusty image of formal French-style dining.

The award to Heron and Grey seems to confirm the long-held idea that the first star is just about the food.

Yotam Ottolenghi: it shouldn’t take a pandemic to make us realise that it’s the simple things in life that matter
4

Anne Doyle: ‘Depression? I know what it is, and it’s a b*tch’
Real news has value SUBSCRIBE