Reading Labels: Many of these spreads contain additives, flavourings and preservatives 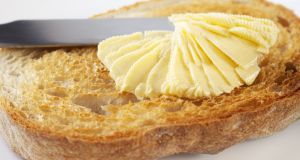 Margarine's selling point is that it is lower in saturated fat, but there is more to these spreads than that. Photograph: iStock

France has a reputation for serving up fine food. So it might be a surprise to learn that it was a French chemist who invented margarine in 1869 as a cheap alternative to butter. The 20th century version of the spread gained popularity as it was touted as being healthier than saturated-fat-laden butter, particularly for the heart.

Margarine fell from grace when it was found that it contained high levels of unhealthy trans fats.

So it might seem surprising that organisations such as the Irish Heart Foundation advise choosing low-fat spreads made from sunflower or olive oil rather than butter. These are different from the margarines of old, however. Those generally used hydrogenated vegetable oils, also known as trans fats, which have been shown to increase bad cholesterol and reduce good cholesterol. (Trans fats have been treated using hydrogen to give them a buttery consistency.) It’s unusual to find trans fats in supermarket products now.

The newer spreads still use vegetable oils, such as sunflower or palm oil, that have not been “hydrogenated” though they will have been treated to make them easier to use. Many of them also have additives, preservatives, colouring and emulsifiers. The selling point is that they are lower in saturated fat, but there is more to these spreads than that.

Saying it is “made from buttermilk” seems like a stretch, however, given that reconstituted buttermilk makes up just 3 per cent of the ingredients.

The first ingredient is water, followed by sunflower, palm and linseed oils. Though palm oil is almost half saturated fat, sunflower and linseed oil major on polyunsaturated fats, which are considered to be good for heart health when eaten in moderation. So far, so good. It’s the other ingredients that make me put this back on the shelf. These include emulsifiers, stabiliser, preservative, colour and flavouring. There are also added vitamins.

It might seem that the Golden Olive spread, also from Kerry Foods, is a better option given that the Irish Nutrition and Dietetic Institute advises using olive oil or rapeseed oils and spreads. Despite the name, there is more rapeseed and palm than olive oil, which makes up just 10 per cent. Rapeseed is high in polyunsaturated fat, while olive oil is high in healthy monounsaturated fat.

Oddly, this spread has milk in the form of whey powder. That’s not what you might expect to find in an olive oil spread. Read past the main ingredients and you will see it has the same emulsifiers, stabiliser and preservative as Low Low. It even has the same amount of salt: a precise 1.3 per cent.

Bertolli’s Olive Oil spread, which is made in Italy, has a similar make-up. Although 21 per cent of the product is olive oil, it uses far more rapeseed, palm and sunflower oils “in varying proportions” adding up to 39 per cent. There is also added buttermilk, emulsifiers, preservative and added vitamins. Not very enticing.

What about old favourite Flora? Surprisingly, water is not first on the list of what goes into Flora’s Original spread. There is no buttermilk either, making it vegan as well as vegetarian. It has a reassuringly short list of ingredients including sunflower, rapeseed, palm and linseed oils. Then there is sunflower lecithin as an emulsifier, vinegar, natural flavourings and vitamin A. It even says it uses certified sustainable palm oil. If only it tasted better.

Someone at Upfield, which owns Flora, may have had the same thought as the company also makes Flora Buttery spread. Despite the name, it has no butter. That may be because Upfield describes itself as the largest plant-based food company in the world. The spread has almost the same ingredients, but without the linseed oil. The oils are in different proportions and there is more flavouring. This is food science at its most creative.

There are other products out there such as Pure’s Dairy-free sunflower oil spread. It also uses sunflower palm and linseed oil, water, salt, natural flavouring, vitamin E and carotene for colour. It has just 13.5 per cent saturated fat, as compared to 17 per cent in Flora original.

High levels of saturated fat in the diet are associated with heart disease, which is one of Ireland’s biggest killers. Many of these spreads, however, have a lot more than fat in them. Additives, flavourings and preservatives are the norm. Check the labels on the back.

The packaging may look different, but often it is the same manufacturer using the same or similar ingredients. It’s still margarine, rather than butter.