Christmas Eve: What should you leave out for Santa this year?

Santa gets treats every year, but what if he is now a conscientious nibbler? 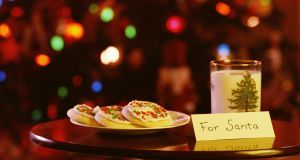 Santa’s treats could be different this year.

The Christmas Eve tradition of leaving out a glass of cold milk and a saucer of biccies or mince pies for Santa, and a few crunchy carrots for Dasher and his crew, can add yet another touch of culinary magic to the traditions we follow around the holiday season. Though milk and cookies have become a part of our Christmas culture, the treats that await Santa change as he travels around the world.

In Chile, the tradition involves a slice of pan de pascua, a fruitcake sweetened with dulce de leche. In Sweden, Santa is often left a cup of coffee, presumably to help keep him awake on his epic one-night journey. In Denmark, the tradition involves leaving out bowls of rice pudding sweetened with vanilla, cream and almonds, a dessert known as risalamande. In truth, this isn’t just for Santa – it’s for the nisse, a mischievous Danish household fairy whose tights can get in a twist if they’re forgotten on Christmas Eve.

When did we start leaving out edible treats for old St Nick? The history of Santa Claus is a still-evolving mesh of yuletide traditions that is said to trace to paganism, early Christianity and 20th-century advertising. Sarah Daniels discusses the origins in Why We Leave Cookies for Santa on thekithcn.com, noting links to the Norse god Odin and the tradition of leaving hay out for his legendary eight-legged horse Sleipnir, and the German tradition of paradise trees hung with edible decorations.

The most popular theory links the tradition to the third-century bishop St Nicholas, who was known for being generous to children and the underprivileged. “The Dutch would hold a grand feast in his honour on December 6th,” writes Daniels. “Unable to stay up for the celebration, children would leave out treats for St Nick... awaking to discover their kindness had been exchanged for presents in the night.” The Dutch tradition, and the name Sinterklaas, is thought to have emigrated to the United States along with Dutch settlers in the 1700s.

But what if today’s Santa Claus is a more conscientious eater than in previous centuries? Maybe he’s concerned about provenance and prefers to buy local? Maybe he’s vegan? For the food-trend-aware Santa, why not swap the glass of booze for some fermented kombucha or a tall cup of frothed oat milk? And how about a plate of kelp crackers to scoop up some whipped artisanal goat cheese? The reindeers will appreciate the sentiment behind a bundle of “ugly” carrots – these magical beasts are famously more into taste than aesthetics. They could all probably do with some CBD-spiked sparkling water – ie hemp-infused liquid – from New York City canned-drinks company Recess. Christmas is stressful and we could all do with some help in chilling out.