JP McMahon: The bookish cook with lots to say

‘I believe there’s a cook in everyone – they just need to be shown how,’ says our new food columnist, JP McMahon

H e was once a vegetarian, but now he has a butcher’s diagram of a pig tattooed on his arm. He underperformed at school, but now he’s working on his PhD. His flagship restaurant lost €100,000 in its first year, but he keeps it going because he believes it’s a project worth investing in. When his first daughter had to have surgery on a cancerous growth just after her birth, he says he “felt privileged”, because there were other children in Crumlin hospital with worse prognoses.

He is a complex individual, who describes himself as obsessive, and has a restlessness that he describes as “a certain lack that I have to keep filling, that’s what drives me on”. Some would say he’s a little too forthright for his own good – they may even point you to the now infamous Twitter spat sparked by his furious reaction to a party of seven no-show at one of his restaurants. Swear words were uttered, the incident went viral and he, and his wife, Drigín Gaffey, were on the receiving end of a torrent of abuse on social media. “Can you not control your husband?” ran one comment, addressed to his wife.

Meet JP McMahon, the Galway restaurateur and self-taught chef and our new food columnist, who makes his debut in these pages today.

With his wire-rimmed spectacles, statement beard and quiet, bookish manner, McMahon looks quite like the university don that he might have become, following his father, a professor of physics, into academia. But the lavishly tattooed arms suggest something more hardcore and hint at his culinary credentials.

The couple met when they were students, Gaffey pursing a Masters in Drama and Theatre Studies while McMahon majored in Art History, though he considered doing his PhD on food in the work of James Joyce.

He is one of a family of six children, three of whom now run restaurants – Gerry has Il Vicolo in Galway and Martin has Picaderos in Maynooth. His sister Edel and brother Alex both work with him in Galway, and Chris, the eldest, is a former banker turned holistic therapist.

McMahon and Gaffey have two daughters, Heather (six), who is doing well now after her tough start in life, and Martha (three). The family live in Galway city, though McMahon is originally from Dublin, and grew up in Kildare.

His children are fussy eaters, McMahon says. “Heather, who ate everything when she was younger, now eats pasta with butter and plain chicken – I make sure it’s good chicken – and is addicted to sweets. We struggle the same as every parent to get them to eat,” he says. 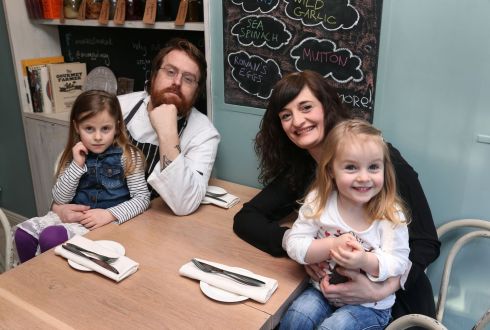 Cava, a bodega and tapas place, was the couple’s first venture into the restaurant business as proprietors, though they had both worked as chefs and front-of-house staff. In 2008 McMahon was head chef at Fat Freddy’s, working alongside his college buddy Enda McEvoy, who would later collaborate on Aniar before setting up his own place, Loam. When the couple got the opportunity to open their own place they ate in every Spanish restaurant they could find, in Dublin, London and New York, researching the market and in search of inspiration. They reckoned Galway was ready for what they had in mind. “I borrowed money from my father and my brother, €40,000 from each,” McMahon says, and the couple launched Cava, just as the recession kicked in.

But it was an immediate hit, with its carefully sourced ingredients, laidback atmosphere and reasonable prices. It continues to do well in its new location on Middle Street, a move necessitated, he says, by the “upwards-only” rent reviews in the former premises on Dominick Street. “It’s the breadwinner”, McMahon says.

Not so Aniar, which although it now has Michelin recognition, lost €100,000 in its first year of operation, in 2011. Had it not won the star under Enda McEvoy, it’s likely that it would have closed. Then, in 2012, McEvoy left, just as the Michelin inspectors were circling for the second time. It wasn’t a surprise. “I knew Enda was only staying for two years from the outset.”

So Ultan Cooke was recruited, coming back from London to his home town to step into McEvoy’s shoes, and the star was retained. “The first year, when we kept it, there was a sigh of relief, but the second year, we knew what we were doing was correct,” McMahon says. “The year after we got the star, we turned a small profit, a couple of grand, and if we can do that, I think its worth it.”

But even now, with a new pricing system designed to make it more accessible, with two-course meals from €35, Aniar is still not a moneyspinner. “Drigín, who handles the financial side of the business, is always checking on it, and saying, ‘how long are we going to keep going, at what point will we decide that this isn’t worth it anymore?’ For me, it’s almost like one of our children, I don’t want to let it go, I want to keep trying out things to get people in.”

Although he is described as “culinary director of the EatGalway Restaurant Group”, McMahon is very hands on, cooking in all three establishments as well as teaching at the cookery school in Aniar.

Not hands on enough to have keys of his own restaurant though, as I discover when he meets me at Cava and we have to wait for staff to arrive to let us in. He’s got bigger things to think about – next October he’s bringing more than 40 of the best known chefs in the world to Galway for Food On The Edge, an international chefs’ symposium.

The event will involve TED-style 15-minute presentations by chefs including Albert Adrià, April Bloomfield, Clare Smyth, Daniel Patterson, David Kinch, Nathan Outlaw and Tom Aikens, to name but a few. The Spiegeltent is being mooted as a venue, the participants’ flights and accommodation have to be paid for, and the event doesn’t yet have a sponsor. “It’s field of dreams stuff alright,” McMahon says. But don’t let that give you the impression that it might not happen – that’s just not an option.

So what’s next for Ireland’s most restless restaurateur? “I still have a pig restaurant in me, I have the name and the menu already. And I’d like to do a steakhouse and a Mexican.”

McMahon has thousands of books, most of them not about food, “a couple of hundred on Beckett alone” and continues to write plays and poetry, as well as working on his cookbooks. The Cava book is in its second print run, and he’s working on books about Aniar and Eat simultaneously, “but Eat will be out first”.

And of course there’s his new weekly column. What does he have in store for us? “I want to inspire people to cook a little bit better. I am self-taught, and I believe there’s a cook in everyone – they just need to be shown how.”

Paul Flynn: Three dishes that will make you a barbecue devotee

The ultimate flavour-maker: Two rasher recipes to try this weekend

How can we get our 14-year-old son to do his homework?

‘No one talks about the non-Irish living here. We basically don’t exist’