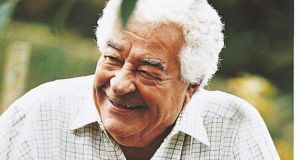 Jamie Oliver has led tributes to the “charismatic charming don of all things Italian”, Antonio Carluccio, who has died aged 80.

Celebrity chef and restaurateur Carluccio died after a fall at his home on Wednesday. The chef, dubbed the Godfather of Italian gastronomy, had more work in the pipeline and was planning a trip across Italy’s Amalfi Coast next year, his representative said.

He was also working on a number of books and was in talks to appear on the BBC’s Saturday Kitchen.

A branch of Carluccio’s opened in Dublin’s Dawson Street in the 1990s.

TV chef Oliver, who worked with Carluccio in the 1990s, shared a message on Instagram. He wrote: “Hi guys, with great sadness I’ve heard that Antonio Carluccio passed away this morning.

“He was my first London boss at the Neal Street restaurant 25 years ago which was an institution and Mecca of wild mushrooms where I had the pleasure of working for him.

“He was such a charismatic charming don of all things Italian!! Always hanging out the front door of the restaurant with a big fat Cigar a glass of something splendid and his amazing fuzzy white hair.”

Oliver credited Carluccio for getting him “hooked” on pasta and that he found him “so very inspirational”.

“I also had the pleasure of making and producing his TV show the Two Greedy Italians with his life long best friend and partner in crime gennarocontaldo who were hilarious together!!” he added.

“He was an amazing food ambassador that will be sorely missed.

“My love goes out to his partner Sabina his family and his dear and close friends on this very sad day. Viva Antonio Carluccio. Cook a feast up there mate.”

It is with great sadness that we announce that Commendatore Antonio Carluccio OBE sadly passed away this morning. https://t.co/LWJtijvtf6 pic.twitter.com/WJsqSks7ud

Former Saturday Kitchen host James Martin said in a statement: “It was a privilege and an honour to have met and worked with Antonio, one of the true greats of TV chefs.

“His passion and commitment to both the restaurant business and to television was lifelong. He was a giant in the food world and he helped bring Italian food to the masses around the world.”

“Sending all my love to his family. I will remember the good times we had together xxxx.”

Nigella Lawson tweeted the Italian for rest in peace for Carluccio: “Riposi in pace.”

Food writer William Sitwell said he was due to work with his “wonderful friend” Carluccio next week at an awards ceremony.

Sitwell added, in a post on Instagram, that he will “so miss” Carluccio’s “filthy jokes, his amazing array of expresso machines, his collection of chilled and jarred mushrooms, his wonderful conversation, the strong Italian accent that never left him.”

French chef Raymond Blanc tweeted: “Heard the sad news of a dear colleague’s departure & a truly dear friend, possibly the most loved italien man in the country by his team-the nation.”

Carluccio was known for his restaurant chain Carluccio’s and for appearing on BBC Two series Two Greedy Italians along with chef Gennaro Contaldo.

Carluccio opened the Neal Street Restaurant in Covent Garden in 1981, when he was named runner-up Sunday Times Cook of the Year.

The restaurant was patronised by the Prince of Wales and Sir Elton John, and launched Oliver’s career before it closed 10 years ago.

He co-founded the high street restaurant chain Carluccio’s in 1999 and was awarded the AA hospitality lifetime achievement award in 2012.

He later sold his interest in the restaurant chain but maintained involvement from a distance.

Brought up in the country’s north-west region as one of six children, Carluccio briefly worked as a journalist in Turin before moving to Vienna and then Germany, and eventually to London to work as a wine merchant, before devoting himself to restaurants.

Carluccio has written more than a dozen books based on Italian food.

He received the Commendatore, the equivalent of a British knighthood, from the Italian government in 1998 for services to Italy.

In 2007, Carluccio received an OBE from Queen Elizabeth for his services to the catering industry. – PA