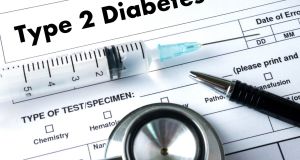 More than 400 million people worldwide, including 200,000 in Ireland have type 2 diabetes. Photograph: iStock

“Hope” is a beautiful word, with a soft start, an assertive end, and cosy roundness in the middle – round in the middle like middle-aged me. In the ice-cream profession, portliness could be considered appropriate and even reassuring.

If, as one of the founders of Murphy’s Ice Cream, I had a paunch that betrayed excess consumption of sugar and a fondness for cream, that luxurious, white emulsion permeated with the goodness of our Irish farming heritage, what harm?

Did my expanding waist and extra chin (or two) not intimate culinary zeal – the crème de la crème, the cream of the crop, the cat that got the cream?

I thought so until I was diagnosed with type 2 diabetes.

Then, for the first time, I felt fat.

On the scale, I felt ashamed.

I breezed into an examination room for blood test results and a top-up of my hypertension medication. I was thinking about new flavours and not expecting the word diabetes

Anyone with a dire diagnosis knows that words can change everything. One day last November, I breezed into an examination room for blood test results and a top-up of my hypertension medication. Sun flooded through the skylight, warming the white walls. I was thinking about new flavours and not expecting the word “diabetes”. Weighed and measured like a foreign object, my body began to sag under the accumulation of the ensuing words: “obese”, “disease”, “degenerative”, and “medication”. Finally, I heard, “serious, progressive, and incurable, I’m afraid”. I stumbled home, prescription in hand, feeling emotional and hopeless.

An internet search didn’t cheer me up – type 2 diabetes is the leading cause of non-traumatic amputations, with a million legs lost a year, and it is the leading cause of adult-onset blindness. We are more than twice as likely to die of heart, liver and kidney failure, and we suffer a greater incidence of stroke, cancer, dementia, and Alzheimer’s. Covid-19 is lethal for us, especially if we are obese. We have a life expectancy 13 years less than the general population. The numbers afflicted are astonishing – more than 400 million people worldwide, including 200,000 in Ireland. At least double that number are pre-diabetic. I spent the next day in bed, too depressed to move.

Luckily, I’m not the type to stay down, and since the antidote for angst in Dingle was often found in the camaraderie of O’Flaherty’s pub, I arranged to meet a friend there – back when this was allowed. Perched on a stool, I gazed mournfully at my pint, trying to accept that water would likely be my lot from now on. I had read that diabetics shouldn’t drink. The talk ranged from politics to Kerry football to local history, and my friend raised a hand to order another round. He is a doctor, and while I don’t like making things awkward by discussing personal medical issues, I had to explain my sudden abstemiousness.

“I have diabetes,” I blurted out. The conversation paused, moved on. Later, he leaned in.

“It can be reversed, you know.” Just like that, the world looked brighter.

Unfortunately, not everyone has such a friend. The self-fulfilling paradigm that type 2 diabetes is incurable informs the usual treatment – drugs, a dose of scare tactics and blame, and outdated, contradictory advice on eating (such as, “carbohydrates raise blood sugar. Include them with every meal”). Studies such as the ACCORD trial show that lowering blood sugar with drugs doesn’t help outcomes, and contradictory advice doesn’t help either. As frightened patients do as they are told and deteriorate, as they are blamed every step along the way, their clinicians don’t seem to question the failure of the treatments. Instead, with circular logic, it reinforces the paradigm.

In just three months, I lost 21kg and brought my blood sugar into the normal range. I even lost a chin (or two). Since then, the weight has stayed off, my hypertension resolved, and my subsequent blood tests have been excellent

The next morning, I searched “diabetes reversal”. It didn’t take long to find testimonials of people who had achieved remission. According to the incurable paradigm, reversing diabetes is impossible. Yet patients are doing it by rapidly losing weight, and trials, including DiRECT (sponsored by Diabetes UK), show a success rate of 50 per cent is possible. The ramifications of this are staggering – 100,000 people could be saved in Ireland, just for starters, as could almost a quarter of a billion worldwide. Half a million legs could remain attached to their owners. We could gain 2.6 billion years of human life while also saving a fortune in drug and other health-related costs.

I kept studying – lectures by Dr Sarah Hallberg, the excellent Diabetes Code by Dr Jason Fung, work by Dr David Unwin, Dr Malcolm Kendrick, Dr Roy Taylor, Dr Michael Mosely, and Tom Jelinek, PhD. I learned about the futility of the “eat less, exercise more” mantra. I learned how carbohydrates convert to sugar and how excess fructose is dangerous since only the liver metabolises it. I learned how hormones drive behaviour and how insulin and cortisol (the stress hormone) impact body fat. I learned about insulin resistance – the real cause of both obesity and diabetes. Too much sugar causes too much insulin, which eventually causes insulin resistance.

I learned three methods seem to work best for losing weight quickly – a low carbohydrate diet, a severely restricted-calorie diet, and intermittent fasting. I decided to combine two of them – low carb and fasting, as suggested by Dr Jason Fung. The fat melted away so quickly that I don’t know why health professionals don’t offer this as the first course of treatment. In just three months, I lost 21kg (3.3 stone) and brought my blood sugar into the normal range. I even lost a chin (or two). Since then, the weight has stayed off, my hypertension resolved, and my subsequent blood tests have been excellent.

Now and then, I still feel emotional. I miss ice cream, for I have taken a break from making it. I miss pastries, cake, rice, bread, pasta, and many other foods I loved. On the other hand, my culinary zeal remains, and I’ve become more mindful about eating. With dark chocolate, raspberries, butter and lobster on my list of low carbohydrate foods, I don’t feel too sorry for myself. I probably shouldn’t admit this, but I still enjoy a weekly pint to keep the angst in check. Best of all, I learned that cream has an undeserved reputation for being unhealthy. I consume it liberally. Each luxurious taste reminds me that there is always hope.

In Irish, “cream” is “uachtar”, and our president is “Uachtarán”. I imagine the President has an endless supply of fresh Irish cream in the presidential fridge. Pannacotta means “cooked cream” in Italian, and it’s a dessert from Piedmont. It doesn’t have much sugar, so I leave it away completely. I use vegetarian gelatine (from carrageenan). It’s naturally salty and amplifies the flavour of the cream. You might have to play with the quantity, depending on the brand.

Method
1 Warm the cream and gelatine over low heat, stirring, until the gelatine is completely dissolved.

2 Remove from the heat. Pour into two moulds or ramekins.

4 Gently transfer onto a plate and serve with berries, with a squeeze of lemon, or on its own.