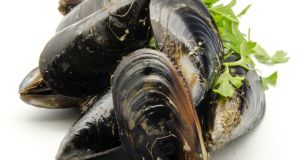 The soup, from Kush Organic Seafarms, is made from organic rope mussels from Kenmare Bay and is one of 34 products nominated for the Prix d’Elite.

An Irish organic mussel soup has been shortlisted for an international award at the world’s largest seafood trade fair which begins today in Brussels.

The soup, from Kush Organic Seafarms, is made from organic rope mussels from Kenmare Bay and is one of 34 products nominated for the Prix d’Elite.

Kush, a family firm, was the first seafood business in Ireland or Britain to win the carbon trust standard, which recognises a company’s efforts to monitor and reduce greenhouse gas emissions. The winner of the Prix d’Elite will be announced this evening at Seafood Expo Global.

Record number
A record 21 Irish seafood firms are taking part in this year’s fair, which will attract more than 25,000 buyers and sellers from more than 145 countries.

Bord Bia is co-ordinating the Irish presence at the show and its chief executive, Adrian Cotter, said the trade fair was a critical platform for Irish exporters. Irish exhibitors attending the event are selling shellfish, whitefish, pelagic and finfish in formats including live, chilled, canned, frozen and smoked. Last year, Irish seafood exports to more than 80 markets were worth €493 million – an increase of almost one-third since 2010.

Asian market
Exports to Asian markets reached €38 million last year – an increase of 41 per cent on the previous year. Bord Bia aims to increase seafood exports to €650 million by 2020.

Rockabill Seafood, which specialises in live, fresh and frozen seafood products, will launch a new 2kg pack of Irish Frozen at Sea Prawn. The prawns are caught wild by Rockabill’s sustainable fishing fleet and frozen within two hours of catch.