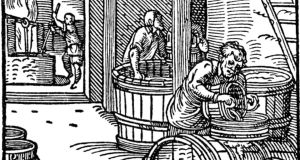 The Beerbrewer, by Jost Amman. Records from January 1565 show stone masons working at a quarry in Clontarf, Dublin, were provided with an allowance of 14 pints of ale per day by the proctor of Christ Church Cathedral

You spend years “burrowing away on dusty documents”, then a line in your research – admittedly attention-grabbing – about workers in Ireland in the 16th century quaffing rations of 14 pints of beer a day, gets noticed, and suddenly historian Dr Susan Flavin is getting calls from all over the place. Images of burly stone masons lurching around drunkenly wielding medieval hammers and chisels come to mind.

Flavin, a lecturer in early modern history at Anglia Ruskin University, has been researching 16th century social and economic history for years, and says today that people have “jumped on” the beer angle. She’s had an offer from someone who wants to recreate a 16th century oat brew and send her bottles, and a well-known craft brewery has also offered help in recreating the methods, for which she’s hoping for research funding.

So, if people routinely quaffed large quantities of beer daily, were most people going about their daily business three sheets to the wind? Flavin’s research shows beer was a vital source of calories and nutrition for workers. For example records from January 1565 show stone masons working at a quarry in Clontarf, Dublin, were provided with an allowance of 14 pints of ale per day by the proctor of Christ Church Cathedral. Gives a whole new meaning to plastered.

“People drank beer because it was a source of calories, as well as for thirst and social reasons,” says Flavin. “It was seen as good for energy and health, and was thought to have restorative properties.” She calculates that 16th century beer may had a high calorific value, providing between 400-500 calories per pint, compared to 180-200 calories in a pint today.

Stone masons were engaged in hard physical labour all day and people thought that beer made hardworking men sweat, which was regarded as good, she says. It may also have been sweeter and nourishing.

“We don’t know how strong the beer was. It is suggested if you made beer using the proportions in the recipes, it may have been up to 7per cent proof. But even if we could recreate it, we don’t know how yeast worked then. We need more evidence. Were people drunk all the time? We’ll possibly never know.”

Documents from Dublin Castle show the household staff consumed 264,000 pints of beer in 1590, which averaged up to eight pints each per day - a similar amount to what was typically consumed in England in the period.

There was a general concern about drunkenness in England at the time, and Flavin mentions some English observations of drinking in Ireland, which are amusing and perhaps the earliest stereotype of the drunken Irish. One contemporary account notes that the “mere” Irish were “excessively given to drunkenness. For howsoever while they lived in woods and in cabins with their cattle, they could be content with water and milk, yet when they came to towns nothing was more frequent than to tie their cows at the doors and never part from the taverns till they had drunk them out of sack and strong water, which they call usquebaugh, and this did not only the lords, but the common people, though half naked for want of clothes to cover them.”

Flavin is from Tipperary town, studied at UCD, lectured in Trinity, and did her PhD in Bristol University. She presents her findings today at the Institute of Historical Research’s latest Food Research Seminar at the School of Advanced Study, University of London.

Beers in Ireland in the 16th century typically had a high oat content, as barley was difficult to grow and hops and wheat were expensive. It was a period of scorched earth warfare, with British troops burning Irish crops; Gaelic troops were into burning crops too, depending on their loyalties.

Hops signalled the beginning of commercialisation of beer, as it kept longer and didn’t have to be brewed every couple of weeks. Hopped beer is also stronger. Oat beer was popular in Ireland, but well before the English plantations, there were hops here, according to Flavin.

Army rations allowed English soldiers in 1566 Ireland eight pints of beer a day. It dropped to four pints a day in 1579, and in the Nine Years War it disappears from the rations altogether, possibly because of problems sourcing grain at the time.

Some of the English regarded the oat beer – a bitter, thick and creamy – as inferior and there are references to soldiers, during the reign of Henry VIII, refusing to drink oat beer, which had gone out of favour in many places by then, barring a few exceptions, including Ireland and Norway.

Tastes, and understanding of what foods are healthy, were very different in the 16th century too. “From records of the period, we see people observed the Lenten fast, and through the year had fish days on Wednesdays and Fridays. So they were eating salt fish for weeks on end. People had a different idea of how food works in body, and wealthier people used spicy and sweet food to balance each other.

Our notions of balanced diets are very new, and there was debate in the 16th century about whether vegetables were even good for you. While servants ate root vegetables in stews, they were generally regarded as bad for health, and that they “engendered humoral imbalance”, according to contemporary medical understanding. Vegetables grow closer to the ground and were regarded as further from God, and so were less noble, says Flavin. “By eating noble foods people believed you became noble.”

Her research detected a change in attitudes between 1570s and 1590s, when the discovery of the New World led to seeds being imported, gardening became trendy, and vegetables and soft fruits became fashionable.