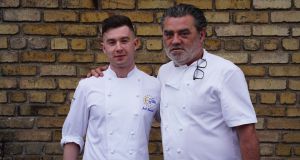 The winner of the Euro-Toques Ireland Young Chef of the Year competition for 2018 is Jack Lenards, from Kilcoole, Co Wicklow. The 22-year-old was one of six finalists taking part in the concluding round of the competition, which was held at Dublin Cookery School in Blackrock, Co Dublin on Sunday, followed by a gala prizegiving dinner at the InterContinental hotel in Ballsbridge.

Lenards works at Mews restaurant in Baltimore, one of three Co Cork establishments recently bestowed with Michelin stars, and was mentored for the competition by the restaurant’s head chef, Ahmet Dede.

The Dublin Institute of Technology graduate was also a finalist in the competiton last year, when he was working as a chef de partie at Restaurant Patrick Guilbaud. "I lost last year, so I came back to win it this year," he told guests at the awards dinner. The annual competition is open to professional chefs under the age of 26.

Lenards wins an expenses-paid trip to South Africa, where he will have an opportunity to work with Dublin-born chef Liam Tomlin, who has four restaurants in Capetown, and who was the guest judge for this year’s final. Lenards will also have the opportunity to spend a week at the Kruger National Park, working at the Singita game resereve.

Tomlin said Lenard would have "an amazing, once in a lifetime travel experience in South Africa", and extended an invitation to all six finalists to travel to Capetown to gain work experience in his restaurants. "Years ago we used to go abroad and never come home," said the Irish-born chef, who recalled starting his career "washing pots in the Royal Hibernian hotel in Dawson Street 40 years ago", before furthering his career in Australia and then South Africa.

Acknowledging that the Irish food and restaurant scene was now on a par with anything to be found worldwide, he said: "The talent today was completely incredible, in my eyes they are all winners."

The Euro-Toques Young Chef competition has been underway since July, and to reach the final, competitors had to submit written work and attend an interview, followed by a semi-final round for the top 14, which involved a cooking skills and techniques task.

For the final round of the competition, the remaining six candidates had to cook two original dishes, a main course using Irish wild venison, and a starter or dessert made with a selection of Irish raw milk cheeses. They had 2.5 hours to cook, and were marked under three separate headings - execution and work practice, taste and flavour, and presentation.

The Euro-Toques Young Chef of the Year competition, sponsored by La Rousse Foods, is aimed at identifying and supporting Ireland’s best emerging culinary talent and has a strong educational element.

The programme for this year’s competition included workshops, demos, visits to suppliers and culinary activities including a tour of Ballymaloe House and Cookery School, participation in the Food on the Edge symposium, and a trip to Italy to visit a vineyard and dine in chef Riccardo Camanini’s Michelin-starred Lido 84 on the shores of Lake Garda.

Now wash your hands: The Irish soapmaker in England during a pandemic
10