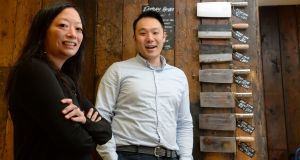 ‘He speaks Cantonese and I speak Mandarin, so we can’t always understand each other,” Chinese- American food writer and author Mei Chin, who has been living in Dublin for five years, is talking about her friend, the Hong Kong-born, Buncrana-raised chef Kwanghi Chan, who trained in classical French food, but more recently has been exploring the food of his heritage.

Happily, they both speak the language of food – as well as English – so their friendship, and recent joint-venture, have flourished. They are partners in Sláint-Chi (slaintchi.com), an online project through which they hope to promote better Chinese-Irish relations, mainly through food.

Chin, who has written for Gourmet, Vogue and Saveur and is a recipient of the James Beard Foundation’s MFK Fisher distinguished writing award, came to Ireland from Manhattan five years ago, and says she ate great Chinese food here from the moment of her arrival. “But it’s not just that you had to know where to find it – you had to look like one of us as well,” she says.

“I am handed a different menu when I go into most Chinese restaurants,” Chan says in agreement. “I’ve taken chef friends to places like Good World and they’ ve had things they’ve never eaten before, because I am given the Chinese menu.”

“Even, like, in Charlie’s [a Chinese/Malay cafe on Sth Gt Georges Street in Dublin], you go in and everyone is eating chips and curry sauce, but I walk in and the woman behind the counter says ‘Hey, we have this really good Gan Chao Niu He [dry fried noodles with beef]’,” Chin says.

With Sláint-Chi they are aiming to address this, through “raising awareness of good places to eat”, and telling some of the stories of the Chinese immigrants who have set up food businesses here. They are also planning to collaborate on a cookbook.

“We are here to highlight the tastemakers and the knife- and wok-wielders who have been quiet heroes in the Chinese-Irish community for decades. We are here to teach how not to be afraid at an Asian market, how to use chopsticks, and how to order with authority and respect,” they say.

But first, it’s time to celebrate Chinese New Year, and on Sunday, January 29th, they are doing a hands-on masterclass in Chinese cooking at Cooks Academy in Dublin, as part of the 10th Dublin Chinese New Year Festival.

It’s hard to imagine hundreds of millions of people embarking on a road trip (or plane, boat or bus journey), to share a meal with family members. But this week this vast number of people in China headed home to take their seat at the “reunion dinner”, traditionally served on New Year’s Eve. It’s the biggest annual mass migration of people in the world, so it’s no wonder that the dinner is so elaborate.

During the six-hour, hands-on class, participants will be guided in preparing four dishes that are central to the festivities. They will be cooking “things that are popular in Chinese homes at new year,” says Chan, who was previously head chef at the Michelin-starred House restaurant at the Cliff House in Ardmore, Co Waterford, and is now a development chef at Baxter Storey Ireland.

Participants will learn how to make steamed hake with braised oyster and black moss; stir-fried noodles with vegetables; steamed and fried chicken dumplings; and a dessert of sweet rice flour dumplings stuffed with black sesame paste, in a sweet ginger soup.

There is much discussion between the two about what should be on the menu for the class, and how things should be cooked. “I always try to emphasise we are all so different; we have commonalities, and yet we come from different families, different regions, and our memories of these dishes and traditions are different,” Chin says.

But for all Chinese families, coming together to roll the dough and stuff the dumplings is an integral part of the New Year festivities.

“My granny does it for us,” Chan says. “Every family has a way of wrapping [the dumplings]. But you’ll always know which one is yours; you’ll always be reminded about the ugly ones; that’s the laugh at the table.”

Ingredients for the new year meal will be sourced at Dublin’s Asia Market, on Drury Street, where they both shop regularly.

Asked to select three things there that they regularly buy and cook with, Chan gathers up sugar cane, Chinese sausage and fried fish balls. The sugar cane “reminds me of Hong Kong, and juice stalls that squeeze the juice out of these for drinking straight away”. The sausage he uses “wok-fried, or steamed with meats to add flavour.” The fried fish balls are a favourite street-food snack.

Chin comes back armed with bunches of vibrant green Chinese chives and garlic shoots, a package of tofu skin, and dried shrimp. “The chives and the garlic shoots, we pretty much put in everything. They’re indispensable in dumplings and I love the way they taste with fresh shrimp.

“One of my favourite comfort foods is something that my mother makes when we are busy or ailing – either the chives or the garlic shoots with shrimp, eggs and sesame oil in a frittata, which we then eat with rice.

“The tofu skin gets used in hotpots and stews, and the dried shrimp is used wherever umami flavour is required. You will almost always combine it with minced pork (for dumplings, buns, meatballs).”

For details of the Dublin Chinese New Year Festival programme, and to book tickets for the cooking masterclass, see dublinchinesenewyear.com

The Irish Times has a pair of tickets to the masterclass this Sunday, January 29th. To be in with a chance of winning, email your name, address and contact telephone number to magazine@irishtimes.com. Please put "Chinese New Year" in the subject line. Entries close at midday on Friday, January 27th.