How long have we been using cutlery?

Now We Know: Forks were once considered a sinful vanity which would draw God’s punishment 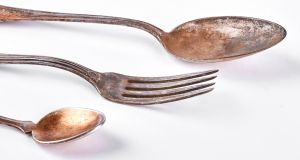 These days the fork and its cutlery counterparts carry a lot less spiritual baggage. Photograph: iStock

Tracing the human race’s dependence and development of eating tools takes one down an archeological rabbit hole. If we narrow down the search to cutlery – as in our modern western notion of knives, spoon and forks – what do we find?

One of the oldest objects in the British Museum in London is an Olduvai stone chopping tool found in an early human campsite in Tanzania. It is believed to be 1.8 million years old. Experts have suggested that this tool could have been used as an early knife, “to cut meat from large animals or smash bones for marrow fat – an essential part of the early human diet”, according to britishmuseum.com.

Spoons are among the oldest eating tools; it’s not hard to imagine early humans making the leap from natural spoons such as seashells or stones to fashioning spoons out of wood, animal horns and eventually metal, adding handles somewhere along the way.

One of the oldest spoons preserved in a museum is believed to be a pair made from mammoth ivory found in the Paleolithic site of Avdeevo in Russia, discovered in the late 1940s. The spoons are believed to be about 21,000 years old. As early as the 1st century, Romans were fashioning spoons with handles from silver – you can see a set of silver spoons that are about 2,000 years old the next time you visit the Metropolitan Museum of Art in New York City.

Forks are the new kid on the block when it comes to utensils used specifically for eating. The Ancient Egyptians and the Quijia culture of present-day China were early pioneers of table forks. According to Smithsonian.org, forks were once viewed as a little scandalous and not without controversy.

“In 1004, the Greek niece of the Byzantine emperor used a golden fork at her wedding feast in Venice, where she married the doge’s son,” writes Lisa Bramen for an article entitled A History of Western Eating Utensils, from the Scandalous Fork to the Incredible Spork. “At the time, most Europeans still ate with their fingers and knives, so the Greek bride’s newfangled implement was seen as sinfully decadent by local clergy. ‘God in his wisdom has provided man with natural forks – his fingers’, one of the disdainful Venetians said. ‘Therefore it is an insult to him to substitute artificial metal forks for them when eating.’ When the bride died of the plague a few years later, Saint Peter Damian opined that it was God’s punishment for her hateful vanity.”

Thankfully, these days the fork and its cutlery counterparts carry a lot less spiritual baggage. If you’re interested in getting a little more up close and personal with your cutlery, try the beginner spoon-carving workshop hosted by Irish woodworker Éamonn O’Sullivan at Hewn Workshop in Ennistymon in Co Clare on June 9th or July 7th . Check out hewn.ie for dates and details.

What is the best exercise for you?
5