Leon, Dublin: This food makes me sad. It feels served up by an algorithm

And a restaurant should at least give its sit-down diners a plate and real, reusable cutlery 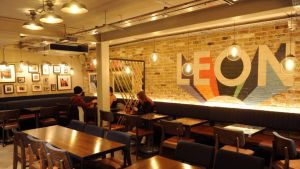 There’s a boy wearing red armbands among a collection of photographs on the wall in Leon. He is swimming on his back, with a pair of oversize goggles on upside-down under his head of tight copper curls. There is no name or context. But he looks as Irish as a Brunch beside a glass of red lemonade. I will call him Finbarr and guess he’s on his mid-1980s laethanta saoire.

A few years later Finbarr got the train to Dublin, walked down to this basement, ditched the detested Dingo jeans his mother bought him and slid into his first pair of second-hand Levi’s, magically morphing into the coolest teenager on the planet.

Leon makes me sad. Where there was once a rail of musty second-hand jeans, now there is set of tables where we eat our cardboard boxes of healthy fast food and disposable containers of hummus. Leon is in the former Eager Beaver on Temple Bar’s Crown Alley, the second-hand shop that sold everything from tweedy jackets to scratchy Aran knits with melamine buttons.

There are some seats at street level but much of the floor space is dedicated to the grab-and-go crowd, because investors don’t really want less lucrative bums on seats

Leon is a chain that works hard to tell you it has heart. So there are niftily designed posters with the names of the four Irish provinces in Irish. There’s even an attempt at some Corkish on the poster about their Cork-sourced eggs: “It’s that simple, boi,” the poster tells us. Patronising cultural appropriation or the work of someone who’s undergone cringe bypass surgery? You decide.

The big wheel keeps on turning, grinding away the Waltons and the Irish Yeast Companies and the Eager Beavers and spitting out a Leon. The chain was born in Carnaby Street in London 15 years ago by smart entrepreneurs John Vincent and Henry Dimbleby with chef Allegra McEvedy. It was named after Vincent’s father. Democratising healthy food was greeted with great love and lots of kudos for their sustainability. The businessmen had big plans from the get-go. Two years ago a private equity firm invested in Leon to “support further global expansion plans”, according to the restaurant’s Wikipedia page.

So what’s it like? It’s fast. It takes more time to scan the menu options than it does for some of the food to begin arriving on to the tray. The staff are kind and friendly and they offer to drop our hotboxes down. There are some seats at street level but much of the floor space is dedicated to the grab-and-go crowd, because investors don’t really want less lucrative bums on seats.

Downstairs past a new olde brick wall with the Leon orange painted on to it there’s a windowless room that is soupishly warm with comfortable booths and lots of dark wood.

There are biodegradable plastic forks, which have the word “compostable” on them. The hummus and pea salads arrive in separate vegware cardboard containers with plastic lids. Everything gets tipped into an under-counter bin. As we sit there a staff member takes the full bag out and replaces it with a black sack with Waste.ie printed on the side. I live in hope it’s going to a compost pile somewhere but either way our lunch has just unleashed a lot of single use waste into an already overburdened world.

That hummus is fine, lemony and smooth. Pay extra and you get some anaemic flatbread the consistency of damp cardboard to go with it. The best dish is the chilli chicken, with the chilli in a separate container. The chicken is juicy and flavourful, like it’s been brined and then chargrilled on a barbecue.

I get the sweet potato falafel, which are bland and mushy, baked rather than deep-fried and everything milled to a soft consistency like they’ve been made by a diligent parent with a food processor trying to hide the vegetables from a fussy eater. They come with a tasty brown rice salad with ribbons of red pepper and minty fresh mint leaves and a pea and cabbage coleslaw.

I go back up to get coffee and get given it in a disposable cup. It is the only way things are served here, whether you’re eating in or taking away

I go back up to get coffee and get given a disposable coffee cup. It is the only way things are served here, whether you’re eating in or taking away. The coffee is nothing special. A “better brownie” and a lemon and ginger slice are served mercifully free of packagingwith just some napkins. They’re very sweet and I’m not sure what makes the brownie better, other than some shards of almond and a taste of orange. It might be better but it’s not really anything like a brownie.

Leon is a generic experience. The food feels the work of algorithm, as do the jokes, like the “if it’s good enough for wee Daniel” clunker on the poster about the organic milk from Donegal. I’m sure the food is healthy. I’m not sure the model of insatiable global expansion is.

When you call yourself a restaurant, I think your sit-down diners deserve a plate and some real and reusable cutlery, not least because binning everything after using it once feels like a weird way to do things. And you’re sitting in a place where reusing stuff was the ultimate in cool.

Lunch for two with bakes, two kombuchas and a coffee came to €38.75

‘Sadly my marraige ended, but it was the kick I needed to start my own journey’
8