‘How hard can it be to make good beer? It transpires it’s pretty hard’

‘There is nothing quite like being in a pub and seeing someone buying something you made,’ says of Cillian Fahy Larkin’s Brewery 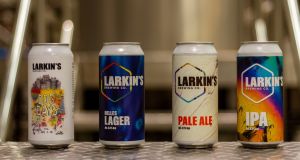 Larkin’s first beers were launched in March 2018, but there was a long gestation period

Larkin’s Brewery is a family business with mother Siobhán Fahy working alongside Cillian and Nick, two of her four sons. The first beers were launched in March 2018, but there was a long gestation period.

Having trained as a surveyor with Saville’s in London, Cillian Fahy spent seven years in Paris working in commercial property, where he had his lightbulb moment. He had set up his own property business with a friend.

“I was sitting in an office with two chairs and a desk, waiting for the phone to ring, just like it did in Saville’s – but it didn’t. So I had a lot of time to think. I knew the Irish loved beer, but at that time there were no Irish breweries [in fact back then there was O’Haras and the Porterhouse].

“I phoned around a few pubs in my home town, and they all said they would be interested, provided the quality and price was right. I thought how hard can it be – it transpires it is pretty hard.”

Over the next 10 years, his brother started home brewing in the family kitchen and garden shed in Bray. “It didn’t really prepare us for what was to come. Commercial brewing is very different. But it certainly does give you a passion and interest in good beer.”

By the time Cillian returned to Ireland in 2017, the craft beer landscape was very different. “It was very competitive with lots of names, lots of craft breweries and yet the Irish consumer still learning about craft beer.

“I had never worked in the consumer business before. It was very tough – quite rightly consumers have very high expectations . It took a lot of work to get us where we are – or were!”

They are still enjoying it, despite the ups and downs. “There is nothing quite like being in a pub or shop and seeing someone you don’t know buying or tasting something you made. There is a great sense of achievement – it is challenging but I love it.”

The Larkin’s IPA, widely available, is a rich rounded beer with masses of peach and apricot fruits.