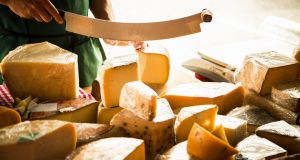 Irish food and drink producers have won 19 three-star ratings - the highest ranking - in this year’s highly regarded Great Taste international awards, run by the Guild of Fine Food in the UK. The three-star products include 14 from the Republic of Ireland and five from the North.

Last year there were 18 three-star awards for Irish producers.

There were 205 three-stars this year. Irish Great Taste three-star winners include Carlingford Oysters, described as “plump, glossy, soft and remarkably sweet”, and “a real taste of the sea”, with one judge saying “it is hard to imagine better tasting, better looking oysters”.

Gooseberry Spread from Crossogue Preserves in Thurles, Co Tipperary is described as “simple but really well made”, having “notes from the flesh, skins and pips all present” and ending in style with a “lovely hedgerow finish”.

James Whelan meats was awarded three stars for three products: Butchers Rib Roast; Heritage Cure Ham; and Traditional Ham on the Bone. Judges described the latter as a “whopper of a ham with a light piggy aroma” and “oozing pig flavour”, with judges agreeing that this “was obviously a happy pig”.

Some 127 Irish-made food and drink products won two stars in the Great Taste awards, and 420 were awarded one star. One and two-star products include cheeses, butters and yoghurts; cakes and breads; fish, meat and poultry; jams, dressings, coffee and fruit drinks.

Founded in 1994 and seen as a stamp of excellence, the Guild of Fine Food’s Great Taste awards values taste above all else, and all products are removed from packaging before tasting. The 144 judges – food critics, chefs, restaurateurs, retail buyers, cooks, producers, food writers, journalists and “influencers” – decide which products merit one, two or three stars. Judging began just before Covid-19 lockdown, and the process moved to remote and socially-distanced judging sessions.

Some 12,777 products were entered this year. Regional winners, including the Great Taste 2020 Supreme Champion, will be announced at a virtual event in October. The full list of winners is on greattasteawards.co.uk.

Six within 60: homes to buy within an hour of the M50
Real news has value SUBSCRIBE