Go with the grain: Unbeatable rice recipes, from pilafs to puddings 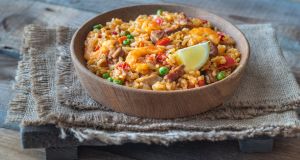 Paella is the ultimate one pot rice dish. Photograph: iStock

Rice is the blank canvas of the food world. As a side dish, it lets the flavours of the main dish shine through. It is rarely the principal attraction, but with a few extra ingredients – and these can be whatever you need to use up in your fridge – it is easily transformed from a reliable but uninspiring accompaniment into a satisfying meal.

Now is a great time to experiment and there is much more you can do with rice than just boiling or frying it. Here are some tasty recipes to get you started.

Fed up with ordinary porridge oats for breakfast? Why not try congee, a silky smooth (usually savoury) porridge made from rice. Hugely popular in Asian countries, it is more labour intensive than regular porridge, but definitely worth the extra effort. The basic congee recipe is simple: washed rice (any type works) is brought to the boil with lots of water and then simmered on medium heat until it’s soft. If you have messed up the ratio, it is easy to correct. Too watery, let it cook for longer. Too thick, just add more water.

Once you have mastered that, you can adapt it however you like. A stock cube is great for adding flavour or you could make your own broth. You can throw in any vegetables or meat you have to hand, while chopped ginger adds an extra kick. Artist Ai Weiwei eats his with pork, Chinese cabbage and fried mushrooms. If you want to use fish, add it just a few minutes before the rice is ready.

Finish with some soy sauce, a scattering of spring onion and a dash of sesame oil once it’s done. Congee is also a great option if you’re feeling unwell – it is the ultimate comfort food.

One of the easiest ways to make a delicious meal with maximum taste and minimum washing up is to put everything into one pot.

RecipeTin Eats’ juicy Chinese chicken and rice is easily adaptable – you can use prawns or mince meat instead – and if you don’t have Asian greens such as choi sum or pak choi, swap them for any other vegetables you have. Sear the marinated chicken in the same pot if you can so the rice can absorb the browning that’s left at the bottom. Any kind of brown or white rice can be used, apart from paella and risotto.

Similarly, Yotam Ottolenghi’s wonderful lamb pilaf with sweet almonds is made with basmati rice and calls for Iranian dried sour plums, which can be found in most Middle Eastern supermarkets. These can also be substituted for dried apricots.

Paella must be the ultimate one pot rice dish. Give Paul Flynn’s easy paella recipe a go and be transported to a Spanish chiringuito.

Fried rice is quick, easy and a great way to use up any leftover rice, although freshly made rice will work at a push. Just spread it out on a plate for a few minutes while it’s hot to let some of the moisture evaporate. Medium to long grain is best. The key to getting a gratifying crunch to your fried rice is to use lots of oil and to stir well while cooking to make sure each grain is coated.

Hanna Chia’s kale and shiitake mushroom fried rice is simple and takes only 10 minutes to rustle up. Other types of mushroom can be used if you don’t have shiitake.

The Omnivore’s Cookbook’s classic egg fried rice recipe, which only requires a few ingredients, will satisfy any hankerings for a Chinese takeaway. Add soy sauce instead of salt for some extra flavour. If it’s Indonesian cuisine you’re after, Felicity Cloake’s nasi goreng made with jasmine rice is spicy and delectable. Don’t forget to top it off with a fried egg.

Mike Tweedie, head chef at the Michelin-starred restaurant at Adare Manor hotel, shared his chicken fried rice recipe as part of the daily Kitchen Compliments series at irishtimes.com, and it was a runaway successs wth readers.

A creamy risotto with lashings of butter and Parmesan never fails to feel indulgent. If you have arborio or carnaroli rice at home, you can easily have dinner on the table in 30 minutes. One of the most crucial steps in making risotto is to make sure the grains are lightly toasted for a few minutes in hot oil or butter before you add the stock. Whenever I’ve forgotten to do this, I’ve ended up with risotto that hasn’t softened sufficiently after the required cooking time.

Rachel Roddy’s hopeful spring risotto is a great way to use up frozen peas, although it can also be cooked with broad beans. If you’re put off by all the stirring involved, then why not give Cloake’s fail-safe no-stir recipe a whirl? Even better, Anna Jones’s squash risotto (you can use butternut squash) is baked in the oven, with minimal stirring involved.

To make a risotto recipe vegan, replace the butter with olive oil and use nutritional yeast instead of cheese. Or, if you end up with some celeriac in your veg box, try Meera Sodha’s risotto with sage, caper and lemon oil.

What puts many people off cooking risotto is the time spent standing at the stove, stirring. As a busy mum of young children, Lilly Higgins got around that by devising a lovely recipe for baked tomato risotto.

Plump stuffed tomatoes are a popular Mediterranean dish that will bring back many sunny holiday memories. Crete Gazette’s Greek version, known as gemista, can also be applied to peppers. Hollow out tomatoes, reserving the flesh. Then fry some garlic and onion with the tomato pulp, before adding long grain rice along with dill, salt and pepper. Don’t cook the rice completely as it will finish cooking in the oven. Use the mixture to stuff the empty shells, then bake until the tomatoes are tender and the rice is done. Any leftovers will taste even better the next day.

Courgettes are also delicious when stuffed with rice and minced meat. To hollow them out, use an apple corer. If you don’t have one, scoop out the pulp with a slim serrated knife. Roddy’s stuffed courgette recipe, which uses parsley, mint and lemon juice, is a vibrant mixture of Italian and Middle Eastern cooking. Eat it with bread so you can mop up every last bit of the sauce.

For those with a sweet tooth, rice is heavenly when served as dessert and rice pudding is an old-fashioned classic. Ideally, use pudding rice but you can get away with using other types of rice such as sushi, arborio or even basmati. Combine with sugar, add evaporated milk and whole milk, grate nutmeg, and dot butter on top before bunging it in the oven. Delia Smith’s recipe is super easy.

For a vegan version, a can of coconut milk is your secret weapon for making it extra creamy. Loving It Vegan’s recipe is made with basmati rice, uses cinnamon instead of nutmeg, and has a delicious custardy texture. It is a big warm hug of a dish, something we need now more than ever. - Guardian.