Tired of cooking? Here’s how to make one meal go a deliciously long way 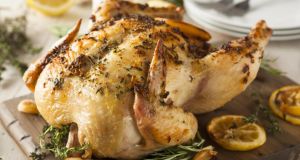 Planning ahead means you can make the most of meals – one chicken can go a long way. Photograph: iStock/Getty

For many, there is no lazing around in lockdown. We want to eat well, but lack the time to cook every meal from scratch. One solution? Modular meal-planning: deliberately cooking too much of a dish in such a way that the initial effort feeds seamlessly into two more. We asked a variety of chefs for their best three-part meal strategies.

Mary-Ellen McTague, the chef-owner at Manchester’s Creameries and currently the coordinator of a community food project, often makes multiple family meals using kilos of beef mince. For a really tasty basic mince, she says: “Caramelise onions with star anise, separately sweat down carrots and celery, and brown your mince. Combine everything with chopped tomatoes and stock; simmer gently for two hours. Towards the end, add dry or fresh herbs, such as thyme and rosemary.”

Use immediately in cottage pie, spiking the mince with tomato or brown sauce. You could take a leaf out of Domini Kemp’s book and top the mince with mashed parsnips instead of potato for a lighter shepherd’s pie. The day after, give it an Italian spin to make bolognese or lasagne (sweat garlic in oil, add and reduce red wine, stir through the mince and reheat). On day three, go kind of Mexican. Roast cumin, dried coriander and chillies in the oven (five minutes at 200 Celsius/180 Celsius fan), grind them and as it heats, let that infuse in the mince. Serve on tacos with the usual garnishes. Not that you must eat mince three days running. McTague says: “Generally, to stop everyone getting bored, if I’m batch-cooking, I use some for a couple of days and freeze the rest.”

Reheating rice unnerves home cooks, but Si Toft, the chef-owner at the Dining Room in Abersoch, says: “If you cool rice quickly, there’s no reason you can’t reheat it.” Cook excess mushroom risotto and chill it spread on a baking tray in the fridge. Next day, make arancini with it: “Make a ball, push your thumb in to make a pocket for the mozzarella and squeeze it shut. Breadcrumb and shallow-fry.” Check the arancini are piping hot using a skewer. On day three, try risotto cake by stirring combined egg and ricotta through the leftovers. Bake in a lined cake tin until hot (15-20 minutes). Serve with salad: “The top gets crunchy like pilaf or you can chuck tomatoes or creamed leeks on, which bleed in as it bakes. It’s a staff tea that ended up on the menu – a banger!” If your risotto is a plainer one, without the mushrooms - lemon and rosemary, for example - you can turn it into Eunice Power’s three-cheese arancini with a hidden nugget of oozing cheese.

What do you do with this lockdown hit once you can’t stomach any more? Sven-Hanson Britt, the chef at Oxeye in London, likes it as French toast spiced with cinnamon, nutmeg and brown sugar, “with a fried egg on top if you want to be filthy”. Or as a boozy trifle base: “If you spiced your banana bread, go for rum; if you want a coffee-tiramisu vibe, do the classic Tia Maria-Kahlua collab.”

“Folk may start with stew, then make a soup; I do it the other way,” says Elaine Mason, the owner of Edinburgh’s currently delivery-only Union of Genius. First, make a slow-simmered tomato soup punched up with harissa and Worcestershire sauce and finished with fried chorizo. “Day two, add boiled chunks of potato, butter beans and crumbled black pudding to make a rich, hearty stew. Day three, add tomato puree and smoked paprika or chipotle chillies – dry or in adobo sauce – and serve over rice.”

“Couscous brings a dish together, but cannot command the stage,” says Alex Claridge, the chef-owner at the Wilderness in Birmingham. Make a salad and “dress it like Gok Wan in his heyday”, with citrus, a “hedgerow of fresh herbs” and “sexier ingredients” from pomegranate to roast almonds. That mix will develop flavour overnight, after which Claridge creates fritters from it. Crack an egg and a little binding flour into the grains, add cubed feta or halloumi, press into rings, fry both sides, then bake in the oven for six minutes at 200 Celsius/180 Celsius fan. Serve with salad. If you season and set some aside initially, couscous is also a useful next-day crumb for salmon.

Sam Grainger, the executive chef at Belzan in Liverpool, is exacting about roast chicken: “I brine it for 24 hours (8g salt a litre, plus aromatics), dry the skin and blast it hard and fast – about 50 minutes at 230 Celsius/210 Celsius fan for a 1.4kg supermarket bird. Rested for an hour, it will be perfectly juicy under its golden skin.”

Afterwards, strip the carcass, retaining the meat for a stir-fry. “I eat rice noodles, but any will do,” says Grainger who suggests starting with ginger, chilli, garlic and Sichuan peppercorns. White wine or even chicken stock can stand in midway for rice wine, he says, and freestyle the late addition of soy, fish sauce or mirin: “Use whatever you’ve got.”

On day three, make soup. Use the carcass to make an eight-hour simmered chicken stock flavoured with onions, carrot, celery, thyme and garlic. That may sound daunting, but the stock should manage itself. Just leave it bubbling away. When the stock is ready, remove the vegetables, but retain them – mashed with soy, fish sauce, chilli flakes and a little cornflour, you can use them to fill supermarket dumpling skins: “A nice little treat.” Then, to make the soup, soften diced carrot, celery, onion and potatoes in butter, add a splash of wine and lemon juice, let that reduce, add the stock and simmer. Bulk the soup out with rice or pearl barley.

Lilly Higgins is a master of the art of turning a roast chicken into several different meals such as her Greek chicken pie, chicken pho, and chicken and leek pie.

Dressed with tahini, honey-roasted carrots and chickpeas make a cracking warm feta salad. Cut finger-sized carrot batons. “Any thinner and they’ll burn,” says Jo Pratt, the author of The Flexible Family Cookbook (due out from Quarto in September) — toss them in olive oil, ground cumin, cayenne pepper and salt and, at around 200 Celsius/180 Celsius fan, roast them until they colour and soften. Add a little honey (a tablespoon for each kilo of carrots) and some chickpeas, and cook for another 10 minutes, then break in the feta, mix and serve. Any leftover veggies can enjoy a further life as carrot hummus, the basis of a pasta sauce or chopped into a frittata. Tip: soak the vegetables in the beaten eggs for 10 minutes so the two meld together, “rather than it feeling as if the vegetables and frittata are two separate components”.

For more ideas on what to do with a bunch of carrots, read this.

Leftovers from a vegetable curry can be jazzed up the next day in a biryani, says Mayur Patel, co-owner of Bundobust. “This is going back to Mum’s recipes, a quick biryani,” says Patel, but it is still an undertaking. First, you need to embolden the flavour of last night’s curry. Cook salt and garam masala in oil, add the vegetable curry and, ideally, rose-water, kewra water, fresh chillies, coriander and lemon juice — “that’s key” — before baking it layered with rice, blackened onions, boiled eggs and yoghurt: “It curdles, so you get this almost curd-cheese through the rice.” Cool any remaining biryani in the fridge and, the following day, fry off patties in butter. Serve with Patel’s zingy chutney: “Blend an entire stalk of coriander, fresh green chillies, garlic cloves and lemon juice, like a salsa verde. Spooned over the patties, that’s wicked.”

Club Mexicana owner Meriel Armitage, who is now helping to feed London’s frontline NHS staff, swears by the versatility of a veg-packed black-bean chilli, flavoured with bay, garlic, chilli powder, oregano and smoked paprika: “You can add anything you particularly like – a kick of cumin can be nice.” Freeze or use it within three days as you would mince in a sweet potato cottage pie or lasagne, as topping for a jacket spud or on loaded nachos.

Matt Bishop, chef at the London restaurant Roast in Borough Market, favours “a creamy flavourful fish base” – fish pie filling minus the eggs or peas, essentially. “Cleverly masked, this can make several different meals.” As well as in fish pie itself, use the mix with spring onion and potato to make fish cakes (200g of fish mix to 300g of dry mash) or a coconut fish curry. Sauté onion, chillies, two garlic cloves and a teaspoon of coriander seeds until soft, add and boil off 75ml of cider vinegar, add a half-tin of chopped tomatoes, and bring to the boil. Add half a tin of coconut milk, 400g of the fish mix, 100g of cubed potato and loads of coriander. Bring to a gentle boil, season and serve with basmati. – Guardian

From Marianne to Claudia Winkleman: The rise of the lockdown fringe
7