Business is continuing with orders for off licences and supermarkets 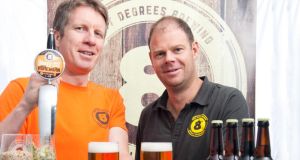 Eight Degrees was set up in 2010 by Scott Baigent (left) and Cam Wallace.

The answerphone announced that craft brewery Eight Degrees in Mitchelstown was closed, but they have started brewing again. “We lost our supply to restaurants, pubs and exports, but we are hugely busy with offies and supermarkets,” says co-founder Scott Baigent.

“Once we saw that we were deemed essential and became aware of the demand, we were able to open up with a skeleton crew. Really we are just doing cans.”

Eight Degrees was set up in 2010 by two Antipodeans Scott Baigent and Cam Wallace, both of whom had Irish partners. The brewery was their way of finding work here. Since then, it has been one of the most savvy and successful of the craft breweries.

In 2018, it was bought out by giant spirit producer Irish Distillers for a substantial but undisclosed sum. Irish Distillers needed a source for their very successful Caskmates whiskey, which is partly aged in craft beer barrels.

“We feel the buyout gave us the best of both worlds as we are left to our own devices. We have autonomy to run everything as an independent brewery just as we always did, but we are able to leverage a great sales structure and the channels into supermarkets and off-licences.

“Supplying beer barrels for Caskmates helps keep things ticking over, and we also have access to Irish whiskey barrels, something that no brewery has ever had. We are trialling ageing beer in those – from an experimental point of view the buyout has really enhanced things,” Baigent says.

“We are releasing a series of beers inspired by the Irish Munros, 14 mountains over 3,000 feet, that takes you to different parts of the country. The current release is Glen of Imaal Oatmeal Pale Ale. Outdoors people love coming across it. In this time of Covid it has really created a sense of nostalgia for when they could go out climbing. I am a bit of a mountaineering enthusiast so it has been nice to do it.”

As for what to drink – “If the sun is still out, the SeisiúnIPA is a really good fine weather beer – sessional but really hoppy, fruity and intense.”