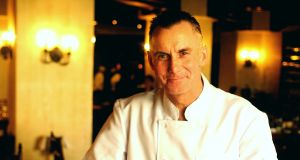 The television chef Gary Rhodes has died, his family have announced. The restaurateur, who opened RhodesD7 in Dublin in 2006, was 59. In a statement, they said: “The Rhodes family are deeply saddened to announce the passing of beloved husband, father and brother, Gary Rhodes OBE. Gary passed away last evening, Tuesday 26th November, 2019, at the age of 59, with his beloved wife, Jennie, by his side.”

After opening his first restaurant, City Rhodes, in London, in 1997, he rose to prominence on the TV series Rhodes Around Britain, as well as on Masterchef and Hell’s Kitchen.

At the height of his career Rhodes had restaurants in the Middle East and the Caribbean as well as in the UK and aboard P&O cruise ships. In 2006 he expanded his empire into Ireland, opening Rhodes D7, on Capel Street in Dublin.

Doubts were voiced at the time about the chef’s choice of location. The 250-seat brasserie opened with great fanfare but closed quietly three years later. The large corner site is now occupied by Brother Hubbard North.

We lost a fantastic chef today in Gary Rhodes. He was a chef who put British Cuisine on the map. Sending all the love and prayers to your wife and kids. You’ll be missed Gx pic.twitter.com/RRWlWhjup8

Sadly Chef Gary Rhodes OBE passed away. My heart felt sympathies to his wife , kids, friends and family, sending love and thoughts ..... Gary was a fantastic chef and incredible ambassador for British cooking, he was a massive inspiration to me as a young chef. He reimagined modern British cuisine with elegance and fun. rest in peace Chef 🙏

Gordon Ramsay led tributes to Rhodes, writing on Twitter: “We lost a fantastic chef today in Gary Rhodes. He was a chef who put British Cuisine on the map... You’ll be missed.”

Jamie Oliver posted on Instagram: “Gary was a fantastic chef and incredible ambassador for British cooking, he was a massive inspiration to me as a young chef. He reimagined modern British cuisine with elegance and fun.”

Grosvenor House, the Dubai hotel where the chef had been running Rhodes W1 after moving to the emirate, in 2011, said in a statement : “The team... are devastated to hear of the tragic passing of chef Gary Rhodes OBE. Not only has the industry lost a true culinary legend, we have also lost an inspirational human being and a very dear friend. No words can express our sadness at Gary’s death or our gratitude for the opportunity to work with him. Our thoughts and prayers are with the Rhodes family.”

Fellow TVchef Ainsley Harriott credited Rhodes with making “cookery the new rock’n’roll”. “He was a real inspiration to a generation of chefs who learned their trade in professional kitchens and, like him, went on to share their passion and skill through television, books and live appearances.

“He was the first to make cookery the new rock’n’roll and will always remain a true icon for all of us. We’ll miss you, mate.” – agencies