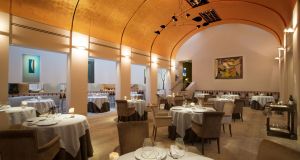 Ireland, which has never featured on either 50 Best list, has eight restaurants included in the new website. Unlike the print and online guide which accompanies the Michelin star-rankings, 50 Best Discovery is destination driven, rather than being “worth the detour”.

The line-up was chosen by members of 50 Best’s 1,700-member global voting panel, the Academy, which is made up of industry experts, chefs and food and drink writers

A search by location reveals three restaurants in Dublin: The Greenhouse, Restaurant Patrick Guilbaud and Chapter One. There are two in Belfast: Ox and James St, as well as two in Cork: Ichigo Ichie and Ballymaloe House. Galway has one entry, Aniar.

All but two – James St and Ballymaloe House – have Michelin stars, with The Greenhouse last month joining Restaurant Patrick Guilbaud at two-star level. However, there is no mention of rurally-located Aimsir in Co Kildare, which made headlines when entering the most recent edition of the Michelin guide at two-star level, just five months after opening.

The website offers a location map, guide price, opening hours and a brief review of each establishment it features. Dublin’s Chapter One, the subject of a very favourable review in the Washington Post last week, is described as a restaurant that “shows off Ireland’s diversity in dishes such as smoked organic salmon with Lambay crab pancake and ravioli of foie gras with pistachio and globe artichoke.”

The Greenhouse, on Dawson Street in the capital, has “boundary-defying cooking”, while Restaurant Patrick Guilbaud’s review includes mention of “serious fine dining”, while noting that “Prices are also serious, with the eight-course tasting menu coming in at almost $230, and that is before a drop of wine has been poured.” Prices throughout are quoted in dollars.

In Co Cork, Ballymaloe House, the only Irish entry not located in a major city, is described as “an Irish farm feast”, and its dessert trolley comes in for special mention. Ichigo Ichie, in Cork city, is noted as “Ireland’s first kaiseki tasting menu restaurant.”

Ox , with its “produce-led contemporary classic” menu, is said to have “redefined Belfast’s dining scene.” The review of James St notes its “refined but relaxed menu of classic bistro dishes .”

In Galway, Aniar is described as “ the flagship restaurant of Galway’s top chef JP McMahon’’ and the focus is on “terroir cuisine from the west of Ireland.”