Do you want ice with that? Chef’s hack stops the delicate cheese and black pepper on a cacio e pepe pizza burning in the oven 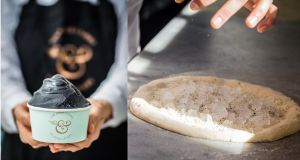 Get your game on: As Game of Thrones fever descends, a Dublin restaurant is serving ice-topped pizza and black ice-cream

Hungry for the final season of Game of Thrones to start? As the April 14th transmission date for the cult TV series approaches, Dublin restaurant Fallon & Byrne is bringing pizzas cooked under a layer of ice, and mysteriously blackened ice-cream to the medieval banquet.

A Song of Ice and Fire, writer George R. R. Martin’s title for the series of fantasy novels, inspired Alessandro Capozzi, head pizza chef at F&B’s Rathmines branch, to come up with a solution to a problem – how to stop the Parmesan and pecorino cheeses and black pepper on his Cacio e Pepe pizza burning in the ferocious 350-degree heat of the oven.

Because this pizza doesn’t have any tomato sauce, the cheese was scorching before the base was ready, so now Capozzi tops each pie with a layer of ice just before it goes in the oven.

According to Jennifer King, brand manager for the restaurant group, as the ice evaporates, it prevents the cheese from burning, but doesn’t result in a soggy base.

Diners at the Rathmines restaurant and food store can channel the Game of Thrones theme further by rounding off their meal with a scoop of dramatic black ice-cream. Powdered bamboo charcoal is added to the ice-cream base, turning it a dark inky black colour.

Pasta is not past it when it comes to nutrition
9

Stillbirth and siblings: Children need to learn how to grieve
10