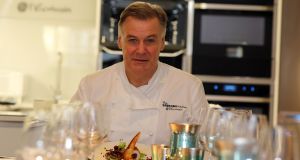 Derry Clarke of L’Ecrivain is getting on his bike for Cystic Fibrosis Ireland. Photograph: Nick Bradshaw 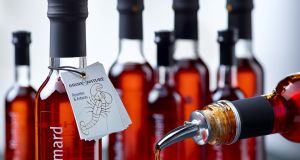 Lobster oil made on the island of Groix, off the Brittany coast, which is sold in Fallon & Byrne

Dine in Dublin, with deals, discounts and special events in restaurants around the capital, returns on February 22nd-28th.

The glass-walled Dine Pavilion will once again be erected on O’Connell Street where chefs will be doing cookery demonstrations, which are open to the public, from noon until 5pm on February 20th-24th.

Preboooking for all events – and there’s talk of a “bottomless mojito” offer at one well-known city centre venue that’s sure to sell out fast – will be available at dineindublin.ie

FLAVOUR FROM THE DEEP

Lobster oil (€29.95/250ml), made on the island of Groix, off the Brittany coast, is an interesting new addition to the shelves of Dublin food store Fallon & Byrne.

The vivid red colour of the oil comes from many hours of gentle cooking with the shellfish. F&B food hall buyer Donal Flynn discovered the product at a trade fair in Paris, and his colleague, marketing manager Jennifer King, shares his enthusiasm.

“I’ve been adding it to seafood linguine, and I’ve used it in both chowder and bisque. It’s one of those magic ingredients – a bit like really old balsamic – that will give an amazing flavour to a dish. Even something as simple as mashed potato can be elevated to something special.”

MEAL MAKERS ON WHEELS IN AID OF CHARITY

If you want to eat in a restaurant in Ireland on May 23rd-25th, you might find your choices restricted, but all in a good cause. More than 100 chefs have already signed up for a three-day charity cycle, part of the Burren Slowfood Festival, to raise money for Cystic Fibrosis Ireland.

It’s being organised by keen cyclist Shane Smith of YesChef magazine, who thought initially he’d get 20-40 participants, “but now we’ve got over 100 and I’d like to build it to 200”, he says. Chefs lining out in Lycra include Derry Clarke (pictured), JP McMahon, Wade Murphy, Michael Deane, Warren Massey, Gareth Mullins and Bryan McCarthy.

Entry is open to all chefs and minimum sponsorship is €500 (£360), which includes hotel accommodation and two dinners, a Chefs for Charity top and food stops en route. The first day’s cycle will be 70km, from Lisdoonvarna to Galway. The next day cyclists go from Galway to Maam Cross and through Connemara, returning to Galway with 110km on the clock. The final day involves a 75km trip back to Lisdoonvarna. See yeschef.ie/teamyeschef