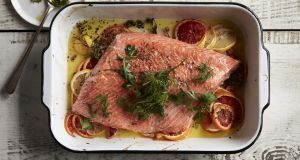 Just what we need after all those pulses and pastas. Here are four easy ways to get a seafood feast on the table.

Alison Roman is behind this recipe, in which a large piece of fatty salmon is slowly roasted in a generous amount of olive oil, beneath a cloak of herbs. The fat-on-fat technique makes it nearly impossible to overcook the fish. Plus, you can flavour the oil with whatever you fancy, spices, herbs, citrus, chillies, which, in turn, will flavour the fish. It’s one of those dishes that sits perfectly in the center of a Venn diagram where “looks impressive” and “not a ton of work” overlap.

1. Heat oven to 150 degrees Celsius or equivalent. Season salmon with salt and pepper on both sides. Place in a large baking dish with sliced lemons, orange and thyme (or rosemary, oregano or marjoram), if using.

2. Drizzle everything with olive oil and bake until salmon is just turning opaque at the edges and is nearly cooked through, 25 to 35 minutes.

Tips: Bathing a large piece of fish in a lot of oil, then slowly cooking it, works well with cod and halibut, also with yellowfin tuna. We love it best with salmon, though. Store any leftover fish in the oil you cooked it in to keep it from drying out. Later, you can use it to elevate a salad or a bagel with cream cheese.

SALMON WITH POTATOES AND HORSERADISH-TARRAGON SAUCE

1. Heat oven to 200 degrees Celsius and liberally grease a 9-by-13-inch glass baking dish with butter. Slice the potatoes paper-thin (less than 1/8-inch thick) and line the dish with the potatoes, slightly overlapping them as you arrange them in an even layer. Season generously with salt and pepper, dot with the shallots and bake until the potatoes are almost cooked through, about 20 minutes.

2. Meanwhile, prepare the horseradish-tarragon sauce: Add the sour cream, prepared horseradish, 2 tablespoons each tarragon and chives, the white pepper (if using) and 1 teaspoon salt to a medium bowl and stir to combine. Refrigerate.

3. Sprinkle the salmon with the paprika and season with salt. Remove the dish from the oven and gently place the salmon on top of the potatoes. Brush 2 to 3 tablespoons of the horseradish-tarragon sauce over the salmon to coat, then bake until the fish flakes with a fork, 15 to 20 minutes, depending on the thickness of the fillet.

Tips: You could use halibut or cod in place of the salmon.

Poaching boneless, skinless fillets in a brothy sauce is a foolproof (and undeniably delicious) method for cooking fish. For this recipe, Alison Roman suggests meaty, mild-flavored, firm-fleshed varieties like cod, haddock, pollock, halibut or flounder. Her flavourful sauce, made from burst cherry (or other small) tomatoes, sizzled shallots and toasted garlic, has a summery vibe, but you could substitute a can of peeled tomatoes in the depths of winter, or whenever you can’t find good, fresh tomatoes.

1. Heat olive oil in a large saute pan (use one with a lid) over medium-high heat. Add garlic and shallots and cook, swirling the pan constantly until they start to toast and turn light golden brown, two minutes or so. Add chilli flakes and swirl to toast for a few seconds. Remove from heat and transfer all but one tablespoon of the chilli oil to a small bowl.

2. Add tomatoes to the skillet and season with salt and pepper. Cook, tossing occasionally, until they burst and start to become saucy and jammy, 5 to 8 minutes. Add fish sauce, if using, and 235 mls water, swirling to release any of the bits stuck on the bottom of the skillet.

3. Cook until the sauce is slightly thickened but still nice and brothy, 3 to 5 minutes. Season with salt and pepper.

4. Season the fish with salt and pepper and gently lay the pieces in the brothy tomatoes. Cover the pan and cook until the fish is opaque and just cooked through, 4 to 6 minutes (slightly longer for a thicker piece of fish, like halibut).

5. To serve, transfer fish and brothy tomatoes to a large shallow bowl or divide among four bowls. Drizzle with reserved chilli oil, more olive oil and the crispy shallots and garlic. Top with cilantro and mint, and serve with limes for squeezing over the top. Serve with tortillas, toast or rice, if you like.

Tips: The coriander , mint and limes at the end are absolutely crucial to the success of the dish. They add a real pop of freshness at the end.

Quick to make and very pretty to behold, this weeknight recipe from Melissa Clark has more verve than most. The roasted peppers turn sweet and golden, while olives add a salty note that goes nicely with the mild, flaky fish and a garlicky parsley dressing. Cod or haddock make fine substitutes if you can’t find hake, though you may have to adjust the roasting time. The thicker the fillets, the longer they will take to cook.

1. Heat oven to 200 degrees Celsius. Pull one tablespoon thyme leaves off the bunch and finely chop.

2. Season fish all over with a large pinch or two of salt and pepper and rub with chopped thyme leaves. Let rest at room temperature while you prepare peppers.

3. Spread peppers on a rimmed baking tray pan, and toss with 1½ tablespoons oil, ½ teaspoon salt and the black pepper to taste. Top peppers with the remaining thyme sprigs. Roast, tossing occasionally, until peppers are softened and golden at the edges, 15 to 20 minutes.

4. Increase oven temperature to 220 degrees. Push peppers to the edges of the pan, clearing a space in the center. Lay fish out on that empty space and drizzle with oil. Scatter olives over the top of fish and peppers. Roast until fish turns opaque and is just cooked through, 6 to 10 minutes.

5. Meanwhile, make a vinaigrette by combining vinegar, garlic and a pinch of salt in a bowl. Whisk in remaining 3 tablespoons olive oil, then whisk in parsley. Taste and add more salt or vinegar, or both, if needed. Serve fish and peppers drizzled with vinaigrette.

Tips: You could add some sliced small potatoes as you roast the peppers, if you want some starch in the meal. New York Times.