Coronavirus: What happens when a restaurant becomes a greengrocer

Food businesses are innovating to stay open, from takeaways to complete rethinks 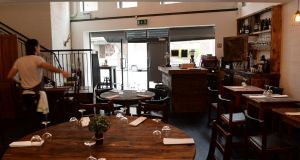 Forest Avenue restaurant in Dublin 4, which has temporarily closed and re-opened as a food shop. Photograph: Cyril Byrne

“Are you waiting for the pub to open?” There was a definite note of longing in the voice of the tourist addressing people in the queue outside the Sussex pub in Dublin 4 on Tuesday afternoon. But those in the line weren’t looking for a pint, they were waiting to gain access to Forest Avenue, the critically acclaimed restaurant run by John and Sandy Wyer.

Like many restaurants in the country, Forest Avenue is temporarily closed, but at noon on Tuesday, it opened its doors as what its owners are describing as a “neighbourhood greengrocer”. The polished cutlery and gleaming glasses have been put away, and the space has been reconfigured.

Instead of smart tables and chairs, there are baskets and boxes packed with vegetables and fruit, counters stocked with bread, pastries, soup and a small selection of cooked dishes, dressings and condiments, as well as frozen chicken stock and handmade fresh pasta. Big sacks of potatoes lie up against a wall.

Organic vegetables from McNally Farm and Sean Hussey and Sons, and fish and shellfish from Niall Sabongi’s Sustainable Seafood Ireland were also being snapped up by eager customers on Tuesday. There was a cheering burst of colour too, from a selection of mixed bouquets from Ginkgo florists, as well as Clean Slate candles – and four toilet rolls in a brown paper bag for a couple of quid if that was on your wish list.

Once inside the door, customers first had to hand sanitise and then put on a pair of disposable gloves, before picking up a wicker basket

Patience was required to gain access to the shop, with only four customers being admitted at a time. Joining the conspicuously socially distanced line at 1pm, it took me more than an hour to reach the top of the queue. But it was all very good humoured, with lots of chats being had and a we’re all in this together feeling pervading. Drivers slowed down as they passed, wondering what the queue was for.

The customer profile seemed to be a mixture of regular customers of the restaurant, out to show support, and a younger cohort, perhaps spillover from the queue for coffee at 3fe at the other end of the street. Forest Avenue sourdough seemed to be on everyone’s shopping list, and there were a few anxious glances when a passing chef mentioned they were running low on bread.

Once inside the door, customers first had to hand sanitise and then put on a pair of disposable gloves, before picking up a wicker basket. Shopping slots were being restricted to 10 minutes, to try and shorten the waiting time. Payment was by card only.

“We had a very good first day, considering it is our first go at being green grocers. We will be open this week from 11am-5pm, Monday-Saturday,” said Sandy Wyer, who usually runs front of house at the restaurant.

The couple came up with the idea to keep their staff “employed and occupied”, but also see it as a social experiment. “We really want this to be a way of people connecting when they can’t really connect ... We want to be able to keep people’s spirits up during this difficult time. The only way we know how to do that is with food.”

Chef John Wyer also plans to bring the outside world into his kitchen during this period, by filming a series on videos and posting them online. As shoppers filled their baskets on Tuesday, he and his team were making yet more bread, and working away in the open kitchen at the back of the room

The Wyers are not the only restaurateurs reinventing their business as a result of the virus. In Mount Merrion in South Co Dublin, chef and restaurateur Gaz Smith launched Mike’s Takeaway from his fish and seafood restaurant, Michael’s, on Tuesday night. Orders were taken by phone and food delivered to waiting cars.

Widely promoted on social media, the initiative proved to be very popular. “We served more than 220 meals over four hours,” Smith said. “We had planned to stay open until 9pm but by 8pm we had no food left. We will be streamlining the menu to cope with numbers and maintain standards. We just ordered from nine suppliers for tomorrow, the knock-on effect is huge.”

In Howth, Co Dublin Killian Durkin and Jess D’Arcy have launched The Hatch at Mamo, serving lunch and pre-ordered dinners. “We have daily salad, a daily soup, a fish soup or stew, a fish finger sandwich and a daily special. We will change it up daily and will update the website with a link every day."

They are also working on their dinner menu. “Killian is getting really creative with our dinner menu, and is designing more shareable cost effective options for families to order from today onwards. We’re really working on our feet and evolving every day to suit the demands of our local community,” D'Arcy says.

You can buy fresh bread and pastries through a hatch at Bread 41 in Pearse Street too, and if you’re early enough you might get one of the 30 sourdough kits (just add salt and water) they are giving away every day this week.

Patrick Ryan’s Firehouse Bakery in Delgany has launched a Covid-19 survival menu, taking orders for collection or local delivery for woodfired pizzas. Bujo burger restaurant in Sandymount has an online order and collect system in place, as do many others.

Takeaway and delivery options may be the only lifeline available to restaurants in the coming weeks. In recognition of this, the online restaurant reservations software company Tock has launched a to-go platform to assist its clients as they transition into this new business model.

Food producers and suppliers are also looking at different ways to get their stock to customers. Niall Sabongi’s restaurants may be closed, but his wholesale fishmongers is open for business. “We are planning on doing the Forest Avenue market every day and the Honest2Goodness market on Thursdays and then we will open our headquarters in Clonshaugh, Dublin 17 to the public on Saturdays.”

McNally Family Farm, organic vegetable growers, are also having to rethink their distribution, with the cancellation of their regular outdoor market venues. Their farm shop in north Co Dublin has extended its opening hours to Wednesday to Sunday (9am-5pm), and orders should be made online in advance. In addition to the farm shop, collection points have been set up at Forest Avenue and at Bread 41 on Pearse Street (Saturday only, 9am-noon).

Irishtimes.com is building a list of restaurants around the country that are offering takeaway/delivery (independents, not already existing takeaways). If you are a restaurateur and you are open for this type of business, operating within current health and safety guidelines, please get in touch, mcdigby@irishtimes.com