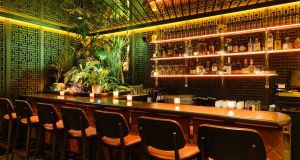 The Gold Bar, a new addition at Hang Dai Chinese on Camden Street

A new bar, a new menu, and a new head chef – they’re not hanging around at Hang Dai, the upscale Chinese restaurant on Dublin’s Camden Street. The gilded door of the Gold Bar, on the first floor of the building, will be admitting its first official patrons this evening (Friday), after a soft opening period.

Australian chef Adam Dunne, who trained under Neil Perry at Rockpool in Sydney and previously worked at 777 on George’s Street, has taken over as head chef. He joined the team three weeks ago, and has been working with joint-owner and executive chef Karl Whelan on a revamped menu for the restaurant, as well as a selection of snacks for the bar, which will be open from 5pm until late, Thursday to Saturday.

A new cocktail menu has been created by mixologist Gill Boyle for the upstairs space, which seats 14 inside, with a further 12 outside on a bright terrace overlooking the street. The gold theme carries through to several of her creations, including a couple featuring gold leaf and gold spray. The bar will be open to walk-ins, as well as for pre- and post-dinner drinks, and is available for private hire.

A golden mirrored ceiling bounces light around the intimate space and the walls are covered in Chinese lattice work, stained deep black. “It took us two days to spray paint it, to get it black enough, and then two days using a toothbrush to clean it,” says co-owner Will Dempsey. The cabinetry was done by Toby Hatchettt of Hatchett Sound & Furniture, who also fitted a bespoke sound system.

The menu at the Gold Bar is a mixture of snacks developed specially for the space, and small plates from the main restaurant downstairs. “That’s me, missing my roots,” says classically French-trained Whelan, introducing a beancurd roll stuffed with chicken mousse, foie gras and hazelnuts, at a pre-opening staff tasting of new dishes and specials on Friday afternoon.

He is also working with pigeon and guinea fowl, and says the new menu is “a fresher, lighter and more contemporary” take on Chinese food. “It’s unapologetic, it is influenced from loads of different places now. But the duck is still there, that’s not going anywhere,” he says, referring to the Irish birds roasted in the wood burning oven that dominates the downstairs space.

For the new menu, the traditional pork dumpling has been re-imagined, and comes with a scallop and crab filling. The silky parcels swim in a buttermilk dressing given zing with droplets of chilli oil. A Chinese take on ranch dressing is how Whelan describes it.

The spring roll is now a slender asparagus spear enrobed in a crunchy coating, that comes with kimchi reduction hollandaise. Grilled salmon is salt-cured for an hour, then blow-torched just before serving, with spicy celery and sea vegetables.

All of theses dishes get the thumbs up from the pre-opening tasting panel that comprises chefs Whelan and Dunne, co-owner Dempsey, joint managers Seana O’Brien (a recent hire ex-Izakaya) and Veronika Tyclerova, along with mixologist Boyle, whose eight entirely new cocktails are shaken, stirred and considered on their own, as well as with the food.

The bar menu price list is, with the exception of the dumplings, priced at under a tenner and the cocktails are €11. Hang Dai introduces its first Sunday opening this weekend, with a full menu from 2-10pm.