Loving Joyce and all things offal

Food and literature: both feed mind and body and give us energy to get through the day 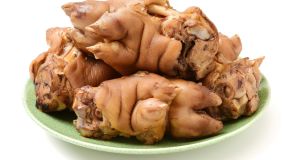 As a summation of all things Irish and a tradition that is fast passing, we should all chew on a pig’s foot occasionally.

We celebrated the recent Bloomsday at Tartare restaurant in Galway by pairing selected readings from James Joyce’s Ulysses with food mentioned in that famous modernist text.

The dual tradition of Irish food, between those who had food and those who didn’t, is well represented in the book, from offal and oats to wild game and baked sole. To celebrate the day, we simmered crubeens (pig’s trotters) until they were soft and served them on toast.

For anyone who has never eaten a pig’s foot, they are a tactical and visceral experience: you need to pick it up and gnaw at it, its gelatinous nature makes your fingers stick to it. But as a summation of all things Irish and a tradition that is fast passing, we should all chew on a pig’s foot occasionally.

The other side of Ireland emerges out of Bloom’s Gorgonzola sandwich, which he has with a few olives and a glass of Pinot Noir. Growing up, I could never have imagined that we had Italian cheese and olives in Ireland 100 years ago. As far as I was concerned, Italian food came to Ireland after we finally made it to the World Cup in 1990. Little did I know, we had just forgotten that it had already been here.

Anyone who knows anything about Bloomsday will know that kidneys, livers and hearts pop up in the book, due to the main character’s love of all things offal. During the reading of the breakfast chapter, we cooked lamb’s kidneys with oloroso sherry, butter and sage and served them to guests while they savoured Joyce’s words. We often forget how closely linked are food and literature: both feed mind and body and give us energy to get through the day.

We finished up with a “lobster boiled alive’”(as it is described in the book. However, I did the more humane thing and stabbed it in the head, killing it instantly.) In Joyce’s time, lobster had still yet to be appropriated full-scale by the wealthy. The working man could still enjoy a lobster roll. As with kidneys and crubeens, it’s time to take back the lobster and make it part of our everyday experience.