The beauty of blending in wine making

Virtually every wine is a blend of some sort 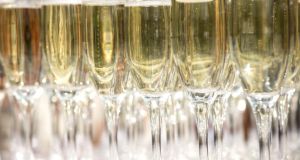 Arguably the greatest blended wine of all is Champagne. Photograph: Thinkstock

I t may not be the first thing that springs to mind when talking about wine, but the art of blending is crucial to the success or failure of a great many wines. There are those who argue that the greatest assets any winemaker can have are the twin abilities to taste and to blend.

You may not realise you are drinking one, but using the term in its widest sense, virtually every wine is a blend of some sort, if only of different parcels within the same vineyard. Blending is simply the process of adding one wine to another. It takes many forms.

Many wine drinkers assume that a blended wine is automatically inferior to a wine made from a single grape variety. We are all used to the inexpensive Australian Chardonnay/Semillon and Shiraz/Cabernet blends. It is true that some takes place for financial reasons, but most blending is done to increase the quality of the finished wine, including many of the above Aussie dual varietals. The aim is to end up with a wine that is greater than each of the individual parts.

The Beauty of Blending was the topic of a discussion and tasting I took part in earlier this year at the Ballymaloe Litfest. I enjoyed the session greatly, not least because there was a wonderful range of wines to taste, including almost all of the great traditional wines; a sherry from Tio Pepe, a tawny Port from Taylors, a Champagne from Bollinger and a Bordeaux and Châteauneuf-du-Pape. Only Burgundy stands apart, relying on one sole grape for its red wine, and one for white.

In the classic Bordeaux tradition, Merlot fills out the centre palate of the lean, angular Cabernet Sauvignon or Cabernet Franc. It has the added benefit of making the wine more approachable in its youth (and ripening earlier too). Shiraz frequently performs the same function in Australia.

The final assemblage of a top château in Bordeaux will be the result of blending hundreds of different barrels of wine. It is a skilled process taking a panel of tasters several days to complete.

Most sherry is made by fractional blending, a complicated system whereby young wine is added to the first cask in a criadera or row of barrels and mature wine removed from the other end. The resulting wine will be a blend of many vintages going back decades, if not centuries.

In the past, a great many Australian wines were made from grapes grown hundreds of miles apart. The practice is less common now, largely because EU law frowns on such things. However, Penfold’s Grange, Australia’s most revered red wine, is a blend of wines from many different regions within South Australia. Its white equivalent, Yattarna, blends Chardonnay from the Adelaide Hills with wine from Tasmania, over a thousand kilometres apart.

It is common for a producer of Chardonnay to put a portion of his wine through malolactic fermentation followed by extensive lees stirring to create a softer more nuanced wine, and blend it back into a fresher more acidic wine that has not gone through this process. Some parcels may be aged in expensive new oak barrels, others in stainless steel. The possibilities are endless but in this way a winemaker can make a more complete and complex wine. Arguably the greatest blended wine of all is Champagne.