‘F**k this, we’re not dead yet’: Colm O’Regan’s small-town Ireland

The comedian’s affection for rural Ireland shines through his novel Ann Devine: Ready for Her Close-Up 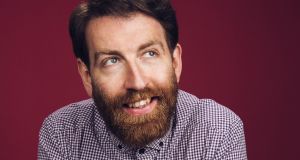 Colm O’Regan: ‘The book is an homage to what the strength of rural Ireland is: the social capital, what binds.’ Photograph: Roger Kenny Photography

Colm O’Regan didn’t set out to be an Irish mother, but it’s funny how things pan out.

O’Regan, a comedian and writer from a village on the Dripsey – one of the tributaries of the Lee, in Co Cork – was writing code and designing applications for websites for 10 years until he changed tack. It was a good job – better to leave it to someone who really wanted it.

Since then O’Regan’s half-anthropological, half-trope-hunting version of an Irish mother’s demeanour and behaviour has become embedded in online discourse and its pop-culture offshoots.

The Irish mother as meme isn’t new, but O’Regan can claim ownership over a lot of its packaging.

Now, the broadness of the Irish mammy character has been honed into a novel. Ann Devine: Ready for Her Close-Up focuses on the title character’s adventures in the fictitious village of Kilsudgeon, where Tidy Towns organising and an influx of mysterious hipster outsiders are causing ravenous and worried curiosity.

“The book is an homage to what the strength of rural Ireland is: the social capital, what binds,” O’Regan says.

“In the book, for example, there’s a bit in it where Ann and Denis are trying to get Netflix going. Netflix breaks down halfway through and then they have to go on to the ‘real’ telly, and it’s another programme about the decline of rural Ireland, and she says ‘Oh, we’re emptying, apparently’.

“And Denis is saying, ‘I don’t know how we’re still alive here,’ as in we’re being portrayed as on our knees all the time. And yet it’s not the experience of every town. People still live there and have strong connections. I think some of the book is about that tendency to write it off, which is premature … The real hive is the people.”

The novel is dense with dialogue, turns of phrases and behaviour that many will recognise. It’s also impossible to avoid the fact that Ann Devine’s life and adventures in book form exists in a post-Aisling literary landscape.

The success of Sarah Breen and Emer McLysaght’s character – which also began at an online grassroots level – has been phenomenal, and the authors are currently developing a film for Element Pictures.

“I’m delighted with what they have done,” O’Regan says. “They’ve opened up the richness of lives not celebrated before. It’s a generosity – people trying their best to be good people, which is the life most people live.

I remember it was a Sunday afternoon, and coming across on three separate occasions, locals ‘up to something’

“They’ve shown that people are interested in reading about people who aren’t necessarily just like them, but a bit like them. We think we know ‘Aisling’, but the books have given us other parts of her character that aren’t predictable or we mightn’t have guessed. They’re just good books.”

It’s inevitable that Irish publishers are hungry hunting for the “next Aisling”, but these characters – like Ross O’Carroll-Kelly – have a tendency to dominate culture as lone wolves, rather than proliferate.

There is the obvious question of the caution O’Regan, a 40-year-old man, must exert to avoid a patronising tone while channelling the authenticity of a middle-aged woman.

“It’s a good question,” he says, adopting the comedic tone of a deflecting politician. “I’m glad you asked that, and before I answer it, can I just say we spent two billion on . . .”

It’s something O’Regan has clearly thought a lot about. “I’m acutely aware of it, absolutely. I can never say whether I’ve got it right or not. I try to listen to as many conversations as possible, which is obviously superficial . . . but trying to extrapolate – from my own experience and from tiny little snippets of conversations – gestures, glances, online as well, Facebook has its flaws but it also allows you to see what people’s thoughts are.”

There are times when O’Regan gets it bang on. A recent tweet from the Irish Mammies account masquerades as a real screenshot of a text: “and if your auntie breda asks me what it is you re doing what am I to say is it computers”.

But it’s his affection for the fabric of small-town and even-smaller-village Ireland that comes through.

He recalls driving in Cork to illustrate what he’s getting at: “In Co Cork, most of the big routes are west to east,” he says. “The twisty roads go over the watersheds, the escarpments. I was driving from north to south – going to a gig in Castletownbere and coming from Mallow – and I remember it was a Sunday afternoon, and coming across on three separate occasions, locals ‘up to something’.

“Sometimes your first indication of something happening is a traffic cone, but you can’t believe a traffic cone because that could have been there for four years, whereas somebody out in a high-vis waving traffic, you know there’s something afoot, be it a blessing of the graves or Pattern Day, or a Tidy Towns litter clean-up. Then there’s more high-vis, like ants. Then there’s a ‘thing’, and it might be the smallest [place], a pub and a postbox, but people are gathered to do a thing.

“I remember it struck me: who are the people who just go and put on that high-vis and think outside themselves to pull something together, sometimes in a village that may have suffered some blows?

“Something may have closed, a post office or factory nearby, and people just go ‘fuck this, we’re not dead yet’ – [there are] the people who turn up. These are the people who keep these places going.”

Ann Devine: Ready for Her Close-Up is published by Transworld Ireland