Beerista: Canvas is run by two sets of brewing brothers, who grow malt and hops on the family farm and brew unusual beers using a huge, medieval-looking contraption 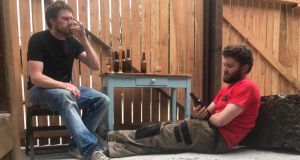 Mark Twohig and Maurice Deasy, who also starred in the Smithwicks home brewers TV ad, using the money they earned to reinvest in the brewery.

“Mad Max” is the name of a big, medieval-looking contraption around the side of an old farmhouse in Co Tipperary. There’s a half-burnt branch sticking out of the front and a large tank at the top and, though the fire’s not lit on the day that I visit, I’m guessing it builds up a ferocious heat when it gets going. And it would want to – it’s got plenty of work to do boiling all the liquid for the attached brewery.

At Canvas, Ireland’s newest microbrewery, they like to do things a little bit differently. Timber for the wood-fired brewery is coppiced on site; malt and hops grow on the farm, while water comes from a nearby spring. The beers, meanwhile, veer towards the more unusual too – a smoked porter, a “session quadruple” and plenty of barrel-fermented ales.

“The brewery’s name is Canvas so therefore it’s a canvas of things that we’re passionate about,” says Mark Twohig aka Twig. He’s one of the four founders, who also happen to be two sets of brothers. Maurice Deasy, who designed the wood-fired kettle, “is passionate about farming”. Dave Twohig and Michael Deasy bring art, design and marketing skills to the picture. “And I’m passionate about food and flavour,” says brewer Mark.

For many decades barley was grown on the Deasy family farm for Guinness. Mark and Maurice also starred in the Smithwicks home brewers TV ad (the money from which they used to reinvest in the brewery).

“I think beer tourism is going to be huge,” says Mark, who also works as a secondary school teacher. “You’ve got places like here only two hours away [from Dublin], then White Gypsy, Mescan and all these cool small breweries all over Ireland.”

We go for a wander around the barley fields, and pause at an old cottage facing a hop garden. “Terroir de Tipperary,” Mark says, taking a seat on a curious-looking three-legged bench, a few sheep bleating in the distance, and handing out a beer.

Fennell, celery and mozerella with a mustard, garlic and honey based dressing.