We now have a growing range of artisanal Irish spirits, some of them truly fascinating 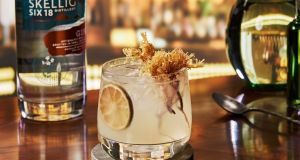 This week, a few new releases to buy for the spirit lover in your life. As the spirits produced by the new Irish distilleries reach maturity, we are starting to see some different styles emerge, with many more to follow. As well as whiskey, we now have a growing range of artisanal Irish spirits, some of them truly fascinating.

Intrigued by a reference to Ireland’s first distilled grain spirit in Fionnán O’Connor’s book A Glass Apart, Chris Hennessy and Jarrod Cuffe found the original recipe in the mid-14th-century register, The Red Book, written during the time of Richard Ledred, the Franciscan Bishop of Ossory.

The original, most likely intended for medical purposes, contained ginger, honey and cinnamon among other botanicals. Now, the pair have launched a new spirit, Aqua Vitae, based on the original, just in time for Christmas. It is available in 500ml bottles with an ABV of 50 per cent, costing €75 from JK Walsh and The Wine Store, both in Kilkenny, and Celtic Whiskey.

Sonny Molloy’s bar in Galway has two unique spirits on offer – Nora’s Irish Dry Gin gift set, (€59) and its exclusive 16-year-old Redbreast whiskey gift set (€345) from McCambridge’s and Frontdoorpub.com. Redbreast is one of my favourite whiskey labels, possibly because so many are aged in sherry casks; the 21-year-old (€180-€200 a bottle) would make a very special gift, but any true aficionado would be very happy with the excellent 12-year-old (€60). Alternatively, Teeling has released the first in its new Renaissance series, an 18-year-old Single Malt for €145 a bottle.

There has been a staggering number of new gin releases over the past year. My favourites include new entrants James Joyce Gin (€50-€55 for 50cl) and Skellig Six 18 (€50 for 70cl).

Life as a carer: ‘If something happens to me, what will happen to my girls?’
10