With several distilleries about to go into production, the range of Irish whiskies is set to expand hugely, hopefully ending the current drought in the market 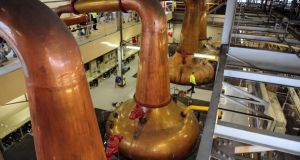 The space given over to Irish whiskey in the Celtic Whiskey Shop, Dublin’s premium spirit shop, should be expanding. After all, Irish whiskey is going through a boom in sales both internationally and at home. Estimates vary, but most agree that world demand is growing by 20 per cent every year. There is plenty of room for further expansion too, as Irish whiskey still accounts for a tiny percentage of the global whiskey market.

Jimmy Redmond of Redmonds of Ranelagh (the other great spirits specialist which this year celebrates 70 years in business) has seen the same upsurge in awareness. “The interest is all in premium whiskey,” he says. “The new whiskey drinker is young, from their early 20s upwards, but they don’t buy on price. These people know their whiskey and would always buy something better.”

Yet Ally Alpine, owner of the Celtic Whiskey Shop, says the space he allots to our home-produced product is shrinking. Why? A shortage of mature whiskey, he says.

“All of the Cooley made whiskeys are disappearing because new American owners Beam are focusing on a smaller core range. There is a bit of a drought at the moment; everyone wants to buy Irish whiskey but there is very little available. The biggest producer, Irish Distillers, need all their own stocks and these days offer a far broader selection of their own whiskies.

“But for these, the new Teeling range and our own special whiskies the choice would have shrunk even more,” says Alpine.

A distilled spirit must be aged a minimum of three years before being allowed call itself whiskey, and quality whiskey needs a decade or more. In 10 years’ time, there should be plenty as a number of distilleries are currently being constructed or have just started production.

Irish Distillers has just completed a major expansion in Midleton, Co Cork, and nearby Dungourney. Tullamore Dew (which currently buys its whiskey from Irish Distillers) will begin production in its new distillery in Tullamore next year. The Walsh Whiskey Company, jointly owned by Brendan Walsh and Italian company Illva Sarrono, will have its new distillery and visitor centre in Carlow in full production by 2016. The company, which exports most of its production, has been in operation for 15 years now. Dingle Distillery is up and running (and also producing excellent gin). Lord Henry Mountcharles has applied for planning permission to build a distillery in Slane Castle, and Alltech, a successful American company owned by Irishman Pearse Lyons, joined Carlow Brewing Company in distilling a new whiskey in Carlow.

The range of whiskies will expand hugely – just not for a few years. Even then, Redmond strikes a note of caution. “You need deep pockets to age spirits for a minimum of three years. You could end up like Scotch with a load of cheap young blends that won’t do anyone any good.”

At the moment it is the independent bottles, those who buy and ‘finish’ or mature whiskey, that are making the running, alongside the new offerings from Irish Distillers. Once Kilbeggan had been sold off to American giant spirit producer Beam, Jack Teeling, son of John, set about forming his own bespoke whiskey company, releasing four whiskies of varying age in 2013, each matured in different oak casks, including rum, Sauternes, white Burgundy, and Californian Cabernet. It makes for a fascinating tasting and a great addition to the range of Irish whiskies.

At the same time, John bought the Great Northern Brewery in Dundalk, formerly used to brew Harp, and will invest €35 million over the next five years to build a large distillery. Jack Teeling intends moving to the Liberties where he will join the Dublin Whiskey Company, which is in the process of building a distillery and visitor centre in an old mill, and Alltech intends moving to a former Anglican church on St James’s Street in Dublin. This will mean that the Liberties (close to Ireland’s biggest tourist attraction, the Guinness Hop Store) will soon have no less than three distilleries.

The Celtic Whiskey Shop has released a series of five (soon to be six) whiskies, each finished in different barrels, under the Celtic Cask series. Not to be outdone, Jameson has released a new version of the Reserve Select Black Barrel. So while some may complain of a shortage, there is plenty to interest the connoisseur while the new wave of whiskey matures.