Meltingly tender beef, chunky guacamole and a tomato and onion salsa is the real deal 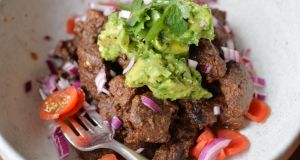 Ah, the 1980s. The decade when Tex Mex hit Ireland for the first time. And it took the country – or maybe it was just me – by storm. In fairness, this Mexican food wave was confined almost exclusively to Dublin, and some city centre locations that were rather fruity 25 years ago, and not in a good way.

The Irish capital it might have been, but Dublin was a culinary backwater then – good restaurants were awash with Cordon Bleu stodge and starched linen. If you were young and broke, but wanted to eat out, your choices were few. It was Golden Arches or nothing.

So when Mexican food came along, with its bandito swagger, day-glo colours and enough fiery heat in its bones to bring even the coolest customer out in a sweat, we were only too delighted to tuck into all those nachos, fajitas, guacamole and, of course, margaritas – jugs of them, in fact.

Now, Mexican food is everywhere. And I have to say, it’s a million times better than in the 1980s too. It’s become so popular and there’s real variety to it, from the edgy and experimental at the upper end, to the most simple, honest, street food. In short: Mexico, we love you.

So this week, here is my tribute to all things Tex Mex – a real Texas chilli and, to go with it, a classic guacamole. But first, a few words about guacamole. Guacamole’s role is to be a creamy counterpoint to chilli heat, but it’s not supposed to be the texture of thick whipped cream; the little cubes of avocado should still be discernible, though never hard or soapy.

And this isn’t possible unless they are perfectly, perfectly ripe. Lord knows how annoying it is when you slice one in half only to find that softness you confirmed – by gently pressing the top of the avocado – to actually be muddy coloured mush with threads of fibrous root running through it. Yes, we all hate ‘The Dud Avocado’ (which is also the name of a hilarious book by Elaine Dundy – worth a read).

The recipe here is based on a few articles and books waxing lyrically about the “perfect” guacamole. My normal recipe is all crushed garlic, lemon juice, Tabasco sauce and heaps of salt and pepper. Proper Mexican aficionados would be horrified.

To make proper guac, you make a sort of loose pesto with the onion, Tabasco, coriander and lime juice, which is then used to dress the little cubes of ripe avocado. Mildness is needed here, so choose a sweet onion (Spanish is good) or even a shallot. Otherwise the onion can be overwhelming.

For the meat chilli, chuck steak is the cut of choice, for flavour, mainly, and it also has just the right amount of fat. Get your butcher to prep it – it should come in big chunks, not small cubes. When cooking it, if the liquid gets a bit low, just add a little hot water to loosen it up, not stock, or it will be too salty.

Then grab a margarita and get eating.