High spirits: Strategy aims to grow global market share from 4 to 12 per cent by 2030 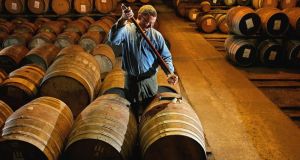 The Vision for Irish Whiskey strategy says Irish whiskey is no longer about playing to the stereotypes of the “fighting Irish” or about spicing up an Irish coffee. File photograph: Jeff J Mitchell/Getty Images

A bid to kickstart a second golden age of Irish whiskey will be launched by the industry on Tuesday when it publishes an ambitious plan for the sector.

Irish whiskey led the world in 1900, with 88 distilleries in operation - but a combination of events meant the sector went into decline and Scotch and bourbon took over.

Now the distillers are seeking to recover lost ground with the publication of the Vision for Irish Whiskey strategy.

It was drawn up by Ibec economists and the Irish Whiskey Association, a group of distillers who have come together to shape the future of the sector.

It says 26 new and proposed distilleries will open in the coming years, selling both niche and global premium brands.

The strategy says Irish whiskey is no longer about playing to the stereotypes of the “fighting Irish” or about spicing up an Irish coffee.

“Irish whiskey has carved out its own niche in the global spirits market. Super and ultra-premium Irish whiskeys are among the most highly rated and scored whiskeys each year. Irish distilleries have won World Distillery of the Year awards three times in the last 14 years.”

The strategy notes Irish whiskey has been the fastest-growing premium spirits category globally over the past five years. Annual exports are now valued at about €365 million, up 220 per cent since 2003.

It says whiskey firms plan to invest more than €1.1 billion in their businesses in the next 15 years, but they are also seeking Government support to help new entrants and provide training and research.

It also seeks Government support for the “necklace of distilleries and visitor attractions” around the State and says the number of whiskey tourists should grow from 600,000 to 800,000 in the medium term.

Bernard Walsh, chairman of the Irish Whiskey Association, says the potential for the sector is massive.

“There are over 130 Scottish distilleries that bring investment and employment into rural areas . . . There is no reason that Ireland cannot achieve similar success,” said Mr Walsh.

But it will have plenty of competition, and some of it is coming from non-traditional quarters. The World Whisky Bible named a Japanese whiskey as the best whiskey in the world for the first time this year.

Second and third places in the awards went to bourbons from the US, while the Redbreast 21-Year-Old was named best Irish whiskey.

‘The strutting farmer gripped my hand. I could smell alcohol on his breath’
8

How technology and social media is undermining family relationships
9