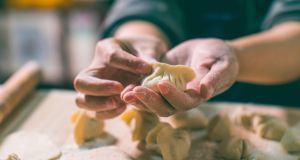 Dublin’s Chinese New Year Festival runs from January 24th-February 10th and heralds the Year of the Rat. Food is a major component of this festival, and the programme of events, free and ticketed, is now available at dublinchinesenewyear.com.

Dumplings are an integral part of the celebrations, and you can listen to food writer Mei Chin talk about the different types, what they symbolise, where they originated and how they are made, at an event in the Chester Beatty Library. It takes place on January 25th at 1.10pm and is free to attend.

If that gives you an appetite for the savoury parcels, you can see them being made and cooked, and taste them, at Asia Market’s dumpling day in the Drury Street store in Dublin 2. This runs all day on January 31st.

And if you want to have a go at making them yourself, with expert tuition, sign up for one of Li Xie’s dumpling workshops at The Vintage Teapot on Cathedral Street in Dublin 1. They take place on February 2nd and 9th, at 2.30pm, and tickets cost €30.

Food On The Edge

Nordic food authority Magnus Nilsson has been booked for a return visit to the Food On The Edge chefs’ symposium in Galway on October 19th and 20th. Nilsson recently closed his ground breaking restaurant Faviken, so if you want to hear what his next plans are, sign up for a super-early-bird ticket for the symposium at foodontheedge.ie. The discounted advance purchase rate of €250, to include access to all events, lunches and evening entertainment, is available until January 31st. More than 600 people attended the two-day event last year.

Dublin Cookery School in Blackrock, Co Dublin has an impressive line-up of guest chefs for one-day masterclasses, beginning on January 25th with Damien Grey of Liath restaurant. This will be followed by Stephen Gibson of Pichet on February 29th and Philip Yeung of Craft on March 14th.

The hands-on classes will run from 9.30am to 4pm and cost €180. The chefs’ menus of dishes they will teach reflect their personal style of cooking and you can check them out at dublin cookeryschool.ie/courses.

A kaiseki menu with sake pairings at ichigo ichie in Cork on Tuesday, February 4th sold out completely on the day it was released. But an extra date has now been added and booking opens today, so there is still time to snap up a seat.

Chef Takashi Miyazaki’s menu will be paired with a selection of sake chosen and introduced by Yuichi Hashimoto. The range will include chilled and warm sakes, each specially selected to compliment the restaurant’s Michelin-starred food. Tickets cost €195, and can be reserved by emailing info@ichigoichie.ie.