Don’t cook too much, spice it up a bit, and be careful who you have on your guest list 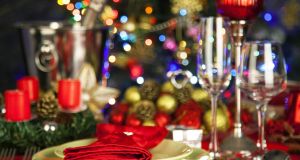 Christmas for me is all about the spices that magically generate scents and flavours I wouldn’t dream of encountering in the height of summer. In my kitchen you could tell it is Christmas even if you were blindfolded.

This, to me, is what seasons should be, each one with their own story. Cloves, cinnamon, star anise, juniper, mixed spice, these are all eager notes in our Christmas dishes, forming their own memorable part in our culinary concerto.

Citrus is important too, it cuts through the indulgence with great aplomb . The orange, and its cousins the mandarin and clementine, preside over Christmas like three wise men, their scent mingling with the spice in perfect harmony.

Booze comes to the fore at Christmas in more way than one. Rum, mulled wine, brandy, whiskey, sloe gin, they all play a more prominent part than they normally do.

I generally don’t believe that abundant alcohol makes cooking better, but at Christmas, boozy generosity seems to work. It is, after all, a celebrated time of excess that we all pay for in the rueful weeks that follow.

In the cookery school, I sagely dole out advice about how to manage Christmas. People get stressed. I’m not supposed to. I apparently have the answers. I tell them the key is not to cook too much, to make lists. Plan with military precision and you’ll be assured of success.

However, one Christmas I succumbed to everything I said I would never do. My steely resolve evaporated in the realisation that my opinion was as useful as a chocolate fire-guard. It became obvious that I fell between the cat and the dog in terms of the pecking order in the house, as I live with three determined and opinionated women.

My paired down elegant Christmas dinner became a lumbering monster of excess. We were having visitors you see, much treasured family from over from Zurich. In my ladies’ opinion, it was important that everyone’s whim was catered for, so we ended up with three types of spuds, five types of veg and a table that groaned under the sheer volume of the feast.

To be clear, I love having a crowd at Christmas, particularly this bunch. They are all, without exception, no trouble and great fun. The pressure to cook so much food much came from within my own camp.

Fortunately though, help was at hand in the form of a talented stray chef and buddy of mine, who shall remain nameless.

He was at a loose end for his dinner, so I gladly nabbed him, relieved to trade hospitality for his much needed labour.

It started off well but steadily descended into farce as he chose this day to “discover” white wine. Two bottles later, he was thoroughly buckled and in isolation in the back room with only me for company – at least there he could safely unleash the filthy jokes and colourful language out of earshot of the kids.

Fearful, and with jangled nerves, we summoned his girlfriend to collect him at 9pm that evening, whereby he plunged to his knees, professed his love, and asked her to marry him.

It was worthy of an episode of Father Ted. In retrospect, it was really one of the best Christmases ever.

I also use it as a threat to my girls, promising to invite Jimmy (he’s obviously not called Jimmy), up again this year if they don’t tidy their rooms. It works and I relish the look of terror on their faces.

Christmas is special, but all of us in the hospitality industry have to juggle feeding our customers and taking care of our own family.

Our great fear as parents is our children telling us that we were never there, we were always working. We have two days off, but that’s ok, we’re used to it and the nature of our business means that we have to be happily open when people want to eat and socialise.

There’s been enough tough times. It takes laughter and happy people to give a restaurant its soul.

Here’s to a stress-free Christmas for everyone.