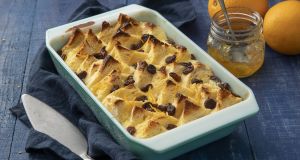 She is very particular about how she makes her deluxe bread and butter pudding and so she staged something of a kitchen takeover. Although this classic pudding can be made with any kind of bread, my mum would definitely recommend a white loaf which has a bit of texture (a tiger cob or bloomer will do fine).

Having said that, bread and butter pudding is a great way to use up any four-day-old sliced pan from the supermarket. Dry bread soaks up the custard without the pudding becoming too soggy. Leftover panettone, which is popular in the shops at this time of year, makes a posher version.

My mum enriches her version with an artisan orange and ginger marmalade stocked by her local butcher. If you don’t happen to have a jar of this to hand, use a richly flavoured bitter orange marmalade with the rind included. A whiskey marmalade would taste great too. Or you could soak the sultanas or cranberries in a little whiskey or brandy to add that touch of luxury.

While bread and butter pudding takes no time to assemble, the most important part is allowing time for the liquid custard to soak into the pudding before baking.

This is a very forgiving pudding, the kind even the smallest children can happily get involved with, though you might want to leave out any liqueur flavours in that case. Adding a few chocolate buttons may just get them to fall in love with baking for life. My mum doesn’t use a recipe for her bread and butter pudding. Similarly, you can easily adjust the quantities of bread or dried fruit to suit the size of dish you have. Marmalade isn’t to everyone’s taste but you could just as easily leave it out.

1 Generously butter the base and sides of a deep oven-proof dish. Place two or three spoonfuls of marmalade in the dish and spread over the base.

2 Trim off the crust and lightly butter the bread slices on one side only. Arrange a layer of bread, buttered side up, over the base of the greased baking dish.

3 Cut the remaining bread into triangles. Starting at one end of the dish, arrange upright rows of three overlapping bread triangles. Continue with two triangles as the next row and repeat with alternating rows until the bread fills the dish (press the rows together to fit as many rows as you can).

4 Sprinkle sultanas evenly over the rows and add a few blobs of marmalade between gaps in the bread layers.

5 Lightly whisk the eggs in a mixing bowl, then add in the cream, milk, vanilla extract and sugar. Whisk until well combined.

6 Pour the liquid over the bread. Press down lightly to submerge the bread. Scatter any remaining sultanas over the top. Dust with cinnamon.

7 Set aside for at least one hour in order for the bread to soak up the liquid.

8 Transfer to the middle shelf of an oven preheated to 180 degrees Celsius, fan or equivalent. Bake for 40-50 minutes or until the pudding is risen and a golden crust forms. Once the top is a deep golden colour, reduce the oven temperature (or cover with tinfoil to stop it burning).

9 Serve warm with a small scoop of ice-cream or chilled whipped cream.

Variation: For a luxury finish, glaze with slightly warmed marmalade, brushed over the top.