Bottled water: can you taste the difference? 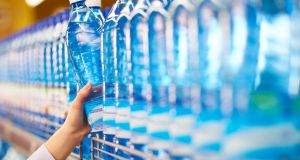 All of us also have access to a variety of bottled waters from places as far away as Fiji. What distinguishes one from the other generally comes down to marketing budget

Water must surely be every marketers’ dream. The basic product costs little and we are repeatedly being told we need to drink more. Up to two litres a day is considered advisable for the average person, according to the World Health Organisation (WHO).

Where that water comes from is up to you. Most of Ireland has access to tap water that is believed to be clean and safe, though it does not always taste great.

All of us also have access to a variety of bottled waters from places as far away as Fiji. What distinguishes one from the other generally comes down to marketing budget.

Take Smartwater, which was launched on to the Irish market last year with a campaign fronted by Jennifer Aniston, its brand ambassador since 2007. There are no published figures as to how much she is paid by Coca-Cola, which owns the brand, but it won’t be peanuts.

Smartwater is described as “vapour distilled spring water with added electrolytes”. So it is creating by boiling water and adding minerals to “create a crisp, clean taste”.

According to the label it is “bottled in Northumberland” in England. A green logo on the front identifies this as a “plant bottle”. According to Coca-Cola, this means that some of the plastic is made from polyethylene terephthalate (PET), which comes from fossil fuels, but some of it is from plants.

It doesn’t say how much, which plants, or how that works when it comes to recycling. It’s hard to see how such a bottle could be put with the plastic recycling, but Coca-Cola is not giving away its secrets. That’s the science bit.

Evian, the “natural mineral water”, lists the composition of its product rather than ingredients. That’s because it is bottled at source in the French town of Evian for its owner Danone. If the bottle looks a bit hazy that’s because it is made from 50 per cent recycled plastic. Compare the labels on Volvic, another mineral water brand owned by Danone and bottled in France, to see how the mineral content varies depending on the source. This will affect the taste.

It’s surprising how many water brands are owned by food and beverage behemoths. San Pellegrino, the sparkling mineral water bottled in Italy, does not mention on the label that the brand is owned by Nestlé.

This bottle also lists minerals on the front because the water comes replete with those picked up on its subterranean journey through Alpine rocks. It has some natural carbonation but carbon-dioxide is added to make the spa water more palatable. That’s the difference between still and sparkling water.

It’s hard to know how to categorise Ballygowan. Ever since the brand was launched in the 1980s, the water has been bottled at source in Newcastle West.

The owners claim it has gone through a 750-year journey through mineral-rich limestone and into the aquifer before being captured in Limerick. The business is owned by Britvic, a soft drinks company, with operations in Britain, France and Brazil as well as Ireland.

The bottle has what looks like an eye symbol over the words NSAI certified. This indicates that National Standards Authority of Ireland gave its stamp of approval to the process.

The green heart logo stamped with Love Irish food seems appropriate given that this has come out of the earth here.

Dunnes Stores Irish Spring water does not have that symbol even though it is bottled at source in Monaghan.

Deep River Rock, which is bottled by Coca-Cola, does not get to use the Love Irish Food symbol either, though its plant is on the island of Ireland in Co Antrim. Its label has “PET” inside a circle with two arrows, which is to indicate the plastic is recyclable. A set of simpler symbols could really help shoppers.

Bottled water is expensive, but sometimes that is the point as with the Spanish brand Solan de Cabras Natural Mineral Water, which comes in a blue glass bottle and costs twice the price of many others.

At other times health is a concern. Many Irish households are still living with “boil water” notices, and unsafe levels of lead have been found in supplies around the country. The answer may not lie in bottled water, however, given that an analysis of some of the most popular brands showed some contained tiny pieces of plastic. The WHO is to conduct a review into the potential risks of plastics in drinking water.

The Smartwater bottle says it best: “Sometimes the answer is right under your nose, and other times it’s floating above your head.”