A quick and easy brack for Halloween

Vanessa Greenwood on Baking: As the dark evenings creep in, it’s pure comfort with a cup of tea and a scrape of butter 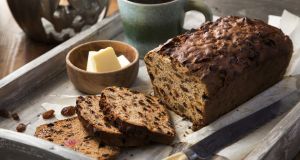 Most families have their own tea brack recipe and you can add a bit of fun with a wrapped up coin and ring. Photograph: Harry Weir

When I see the tea bracks piled high in shops I know its time for me to start asking the kids what Halloween costumes they want to wear. Most families have their own tea brack recipe and you can add a bit of fun with a wrapped up coin and ring – but lots of warnings for those little teeth.

As the dark evenings creep in, it’s pure comfort with a cup of tea and a scrape of butter. The fragrance as you are cooking means it’s time to get out the decorations for some seasonal atmosphere.

Since many of the best traditional brack recipes have been handed down on slips of paper and remain lost for decades in those black holes of the house, it’s hard to look up a good one unless your mum still has a stash of ancient collectible cookbooks (the ones that predate celebrity chefs and YouTubers).

Thanks to one such auntie’s recipe, my own children developed a taste for all types of fruit cake, which I believe is down to the selection of fruit used (my own childhood memories of stumbling across chewy bits of candied peel put me off brack for a while). So I prefer sultanas or bags of luxury mixed fruit and I always include a few colourful glacé cherries to give my kids the thrill of choosing their best slice (in the absence of hidden trinkets).

As traditional tea brack has no butter added to the mixture, it is lower in fat which means that using parchment paper (as opposed to greaseproof) is important to stop the brack sticking to the tin. I find that there is plenty of sweetness in the fruit, so I have used less sugar. It’s worth leaving fruit soaking in tea overnight, this gives the brack extra moisture, which means it will keep well wrapped tightly in parchment paper and stored in an airtight container in a cool dark cupboard, and even more so if you drizzle a wee bit of whiskey over the top.

In a bowl, combine the mixed fruit, glacé cherries, lemon zest and juice. Pour over the cold tea then cover and leave to soak overnight (or at least 4 hours). When ready to bake, preheat the oven to 190°C fan and line a 2lb loaf tin with baking parchment.

Stir the egg through the soaked fruits followed by the sugar, mix well to combine. In a clean bowl, sieve together the self raising flour, baking powder and mixed spice, then add to the fruit mix and stir until all the dry ingredients are moistened (don’t worry if it seems a little stiff, but avoid squashing the fruit as you stir). Transfer the mixture into the lined tin, level the top and bake in a preheated oven for 50 minutes (reducing the temperature to 180°C after the first 30 minutes to avoid the sultanas on the top crust burning).

It is cooked when a skewer inserted into the loaf comes out clean. While still warm, prick a few holes and spoon a little whiskey over the upper crust which will keep the brack moist. Allow to cool fully in the tin.

Variation: As tea brack is basically a rich fruit cake, you can mix it up with other fruits that you might have in your store cupboard such as currants and cranberries. Instead of the whiskey topping, you can glaze with honey while still warm or pretty it up with a bit of lemon drizzle icing.